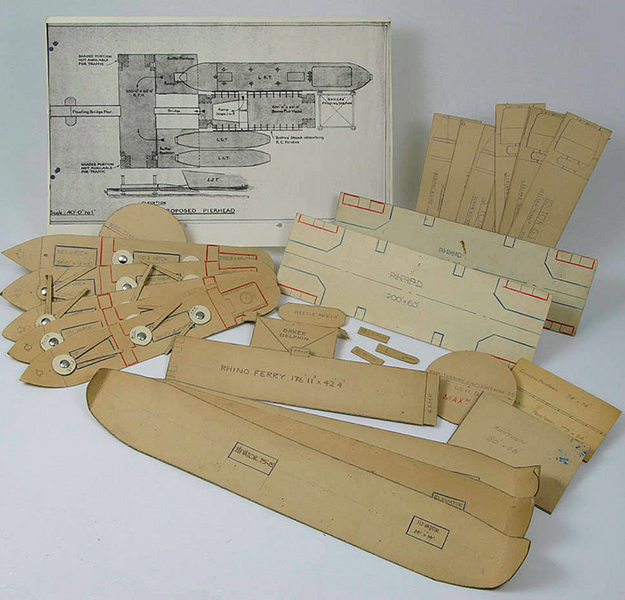 The order to research and construct secret Mulberry Harbours came directly from Winston Churchill: 'They must float up and down with the tide. The anchor problem must be mastered. Let me have the best solution worked out.' The Mulberry Harbours collection has been at McMaster since 1976.

Allied preparations for D-Day were a race against time.

The story of how the prefabricated harbours used for the invasion of Europe were planned and built remains one of the best kept secrets from the Second World War. To this day, the project is considered a remarkable feat of engineering, yet few have ever heard of it.

After the Dieppe Raid of August 19, 1942, Western Allies knew that an amphibious landing was necessary. A vital part of the solution was the construction of artificial harbours, code-named “MULBERRY,” which made the allied landings in France possible in June 1944.

Acquired by McMaster in 1976, the Mulberry Harbours collection, which dates from 1942-1947, consists of classified documents from the British War Office, drawings, blueprints, laboratory reports, correspondence and more than 700 official photographs with security classifications, censor stamps and War Office identification numbers.

Winston Churchill personally authorized the elaborate scheme. On May 30, 1942 Churchill issued a directive to Admiral Louis Mountbatten: PIERS FOR USE ON BEACHES. “They must float up and down with the tide. The anchor problem must be mastered. Let me have the best solution worked out. Don’t argue the matter. The difficulties will argue for themselves.”

Investigations were started in deep secrecy looking at various ways to construct such a moveable harbour. Two harbours would be built — MULBERRY A, for the American-led landing on what became known as Omaha Beach, and MULBERRY B, for the British and Canadian landing at Arromanches. Each harbour would be the size of Dover harbor.

The archive covers the progress of the Mulberry project from inception to completion. The provenance of the collection is that of Colonel V.C. Steer-Webster, a royal engineer who played a leading role in the invention, design, development and trials of all the Mulberry equipment and commanded the War Office branch during the Second World War.

It also includes the typescripts and proofs of Mulberry: The Return To Triumph (1965), written by Michael Harrison, with proofs corrected by Louis Mountbatten himself. Harrison had used the Steer-Webster papers to write his book before the archives came to McMaster Library.

Of note is an original signed document with the caption “Most Secret” prepared by Hugh Lorys Hughes and dated August 10, 1943. It bears testimony to a Welsh engineer’s contribution to one of the greatest Allied successes of the Second World War. His description of “Piers For Flat Beaches” is accompanied by drawings and photographs of his concept for the harbours.

The collection also includes a prototype model in cardboard comprising 88 pieces, used by Colonel Steer-Webster in describing the construction of MULBERRY to President Roosevelt, and two wooden models of a Phoenix Caisson and Kite anchor lend a visual edge to the technical data.

Additional information can be found here.