Creating community in a pandemic 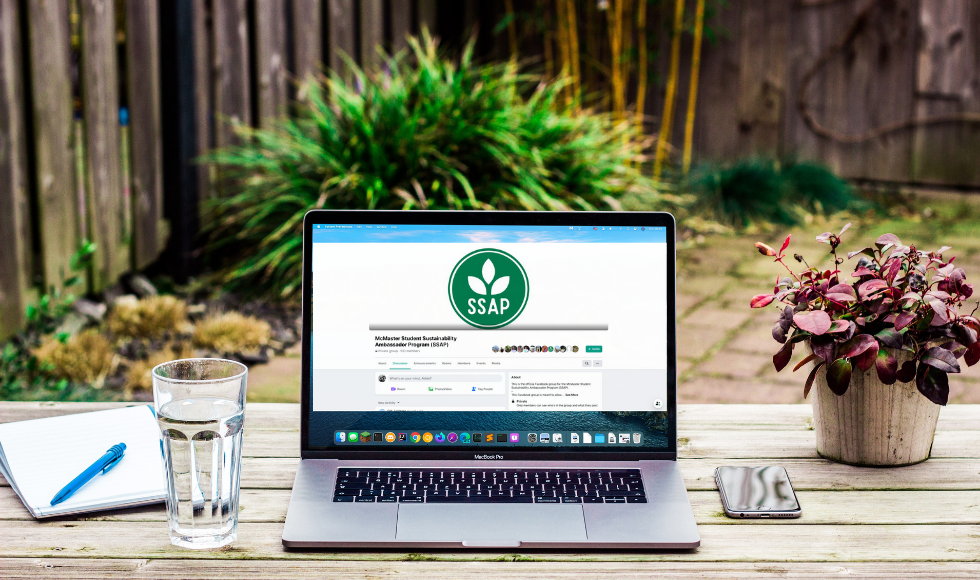 There may be a lockdown order in place, but that’s not stopping McMaster students from creating community, virtually.

One of the newest programs that support student connection is a co-curricular program for sustainability-minded student leaders, called the Student Sustainability Ambassadors Program (SSAP).

“SSAP acts as a hub for sustainability-minded individuals, along with their groups and clubs, to collaborate, share resources, and gain funding for sustainability projects”, says Liana Bontempo, one of the program’s co-creators from Hospitality Services.

During discussions between Hospitality Services and the Academic Sustainability Programs Office, it became apparent that multiple student groups had similar questions and initiatives needing support, but weren’t always working together.

“Through SSAP, we could help break down existing barriers to collaboration and help students use their resources more effectively,” says Bontempo.

“We saw an opportunity and recognized that if individual students and student clubs had additional staff support, access to a larger network for facilitated collaboration, and opportunity to secure financial resources, they could have a much larger impact,” says Abbie Little, program co-creator from the Academic Sustainability Programs Office.

With seed funding from McMaster’s Okanagan Charter Special Project program, Bontempo and Little were able to secure additional financial support from McMaster Facility Services, the MSU, and EcoCanada co-op funding. “The program itself is an example of what can be accomplished through collaboration, even when collaborating remotely,” says Little.

As part of his role as SSAP coordinator, McMaster student Erik Jurriaans facilitates discussions and educational workshops on topics that SSAP members are interested in, like the upcoming advocacy letter writing workshop taking place on February 9, 2021.

“It’s exciting to see firsthand how effectively students collaborate when given the infrastructure and support to do so, and how SSAP is creating a ripple effect in their communities,” says Jurriaans.

Since its launch in October of 2020, SSAP now has more than 100 members on its private Facebook group.

There are also opportunities for members to collaborate virtually through monthly Community Conversation Chats where students and clubs share event plans and resources.

“Before SSAP, learning more about sustainability was limited by which clubs you were aware of and followed, but I’ve been able to attend interesting events by groups I didn’t know existed,” says Krista Henshaw, a fourth-year commerce student.

“Thanks to SSAP, our club, Mac Climate Advocates, has been able to share our ideas with like-minded people and connect with new members and collaborators,” says Jenn Cross, a fourth-year student in the Department of Psychology, Neuroscience & Behaviour.

The SSAP is open to all students at McMaster and exists as a private Facebook group. To find out more and to join, visit the SSAP webpage here.

The McMaster Okanagan Special Project Funding program is now accepting applications for new projects. Creative and impactful projects to improve the health and well-being of the McMaster community can receive up to $5,000 to turn ideas into reality.