From constellations to Classics 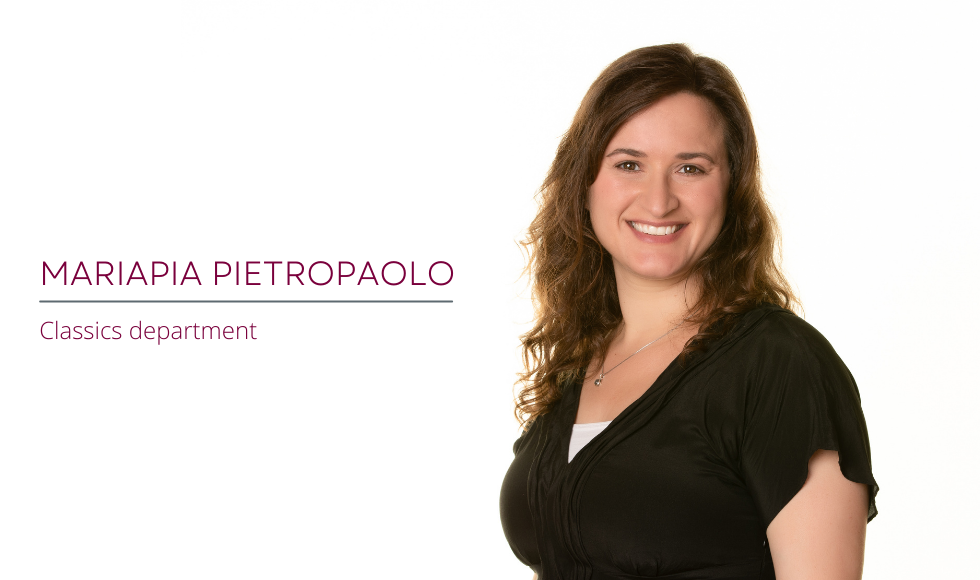 Pegasus, Hercules, Draco and Perseus got Mariapia Pietropaolo into Classics – but she was looking at the night sky, not a book, when that happened.

“Astronomy was a hobby when I was younger,” she laughs. “I became fascinated with the stories behind the constellations, and wanted to find out more about those characters.”

Of the 88 official constellations recognized by the International Astronomical Union, more than half represent figures from Greek mythology, so there was lots to learn – enough that Pietropaolo ended up studying Classics at the University of Toronto, eventually choosing to focus on Rome, not Greece, and receiving her PhD in 2013.

Pietropaolo joined the Classics department at McMaster as an assistant professor in 2018, and is now an associate professor. Last year, she celebrated the release of her first book, The Grotesque in Roman Love Elegy.

Roman love elegies are about unrequited love and the ideal beauty of the beloved – but there’s a lot of ugliness in them as well, says Pietropaolo. The poet ridicules rivals for his affection by insulting their appearance, intelligence and social standing, often using themes of disfigurement or a resemblance to animals. What’s especially interesting, she says, is that the ugliness is an essential part of the beauty the poet extols.

“The book is all about ugliness in the world of beauty,” she explains. “It’s about how ugliness disturbs and destabilizes the reader, but it also engages by subverting expectations – the beloved loves these animalistic rivals, which is fascinating to the poet because he can create beautiful art out of images of ugliness. These ideas of ugliness punctuate the urbane beauty of glitzy, golden Rome.”

One of Ovid’s poems, for example, features a queen who has been cursed to fall in love with a bull. Propertius, on the other hand, portrays a procuress as an old hag “coughing bloody sputum through her rotten teeth,” and yet she sings beautifully as a teacher of love.

“Elegy is full of stock characters – it’s an artificial world of love affairs and unrequited love,” she says. “It’s a world in which negative emotions colour the experience of love. This gives the poet the opportunity to create art that incorporates them into the reader’s aesthetic experience of elegy. Ugliness and beauty are much closer together than you might think.”

While the theme of ugliness and the grotesque has been explored extensively in Roman satire and comedy, it hasn’t been investigated as much in elegy – so the book adds a new area of study to the field of love elegy.

Now, Pietropaolo has moved on to looking at Ovid’s Metamorphoses: more specifically, the story of Echo and Narcissus, and its presence in the Metamorphoses and Ovid’s other works. Once travel becomes easier, she’ll be heading to Pompeii to explore how Echo – who is turned into sound – is represented in paintings.

“I’m shifting from looking at how the poetry was composed to exploring how it was and is experienced as a work of art,” she explains, pointing out that sight and sound are both essential to the appreciation of artistic beauty.

“It was through the sounds of language that classical poetry was experienced. Sounds conjure up images in the mind. In paintings inspired by poetry, images are what you perceive and sound is what is experienced only in the imagination. The aesthetic appreciation of beauty through image and sound is a key theme in the story of Narcissus. And, of course, the story casts a long shadow into the future – we still talk about narcissism all the time.”

That influence on the present, says Pietropaolo, is part of why she enjoys Classics – but it’s not the only reason.

“Classics’ arms are more open than just being centred on Greece and Rome,” she says. “It’s a labyrinth – if you look and keep looking at the details, you’ll find out more and more. It all depends on your perspective: different vantage points reveal different aspects of the same stories and bring them into dialogue with the concerns of later generations, including those of the present.”