Competence by Design: The transition to competency based medical education 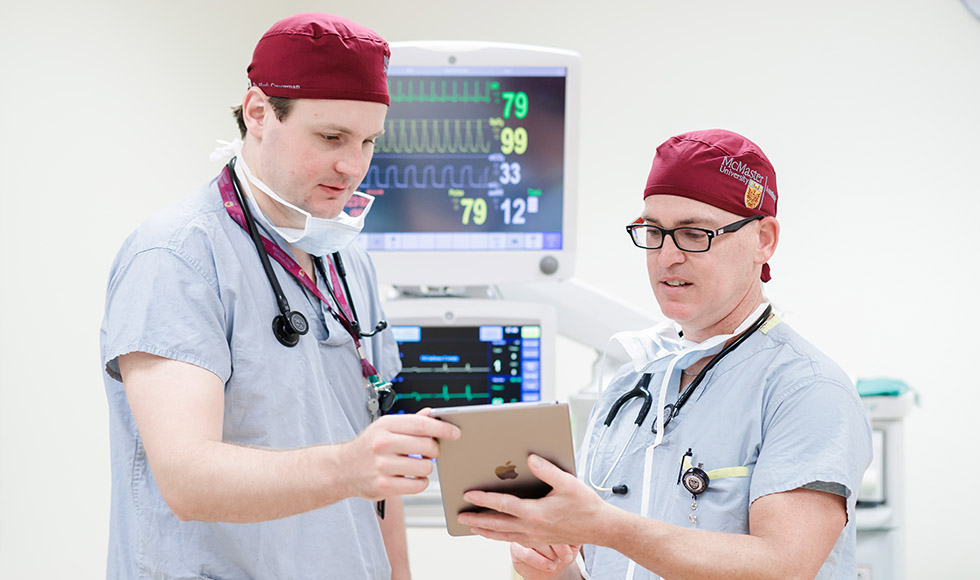 It is considered one of the biggest changes to Canada’s medical education in more than a century.

Competency based medical education (CBME) is being rolled out at McMaster University and in residency programs across the country.

The new outcomes-based training model for residents in specialty programs is called Competence by Design (CBD). This is the tailored version of CBME from the Royal College of Physicians and Surgeons of Canada, transforming specialty medical education from a time-based to an outcome-based approach.

“At the end of the day, our responsibility is to the public,” says Parveen Wasi, assistant dean of the postgraduate medical education program and a professor in the Department of Medicine. “We want to ensure what we are teaching residents, and what they are learning, is appropriate and that at the end of residency training, we are confident that they have acquired all the necessary skills to look after patients. We already have an excellent system of postgraduate training but CBD is helping us make it even better.”

The Royal College developed CBD. The new system of resident learning and teaching was created in partnership with more than 50,000 Royal College fellows and medical school faculty members across the country.

An EPA is a key task of a discipline that an individual can be trusted to perform once sufficient competence has been demonstrated. To progress, residents must demonstrate achievement of all competencies at each stage.

Milestones are the abilities expected of a resident in order to perform the EPA at a stage of competence. Feedback and coaching are part of each milestone that makes up an EPA. Supervisors will observe a resident’s progress on an EPA multiple times.

“We have graduated residents who had satisfactory evaluations,” says Sharon Cameron, project manager for CBME who has overseen McMaster’s postgraduate medical education for more than 25 years. “But are they competent? Would you want them to treat your family? That’s what CBME helps accomplish and puts further strength in our education.”

Technology is central to tracking residents’ progress in CBD. Faculty will more frequently assess EPAs and milestones on an electronic platform that will have the ability to collate each of those pixels of information, which will inform the larger picture of the residents’ development.

“Each EPA has around eight to 10 milestones, so this will make it much easier to help isolate the problem when residents are struggling, where we say, ‘You can do all this, but you are having difficulty with this one aspect, and this is what we can focus on,’” says Cameron. “It makes it more transparent and aware of where the problems are and identifying them early.”

A competence committee at each medical school reviews the EPA observations, along with other performance reports to determine if the resident can move from one stage of the continuum to the next.

While CBD emphasizes competencies rather than time, the number of years needed to complete a residency program is not expected to change for the majority of residents.

CBD is being rolled out concurrently in medical residency programs across Canada. It is expected that by 2023 all residency training programs will have transitioned. Queen’s University is the exception, as it launched the transformation across all 29 of its specialty programs in the summer of 2017.

Anesthesiology and otolaryngology were the first two programs nationwide, including McMaster, to recruit their first cohort of CBD residents for July 1, 2017.

Wasi says feedback to date has been generally positive from the two McMaster programs that made the transition last year. She notes anesthesiology and otolaryngology were ideally set up as the first specialties to transition to the new assessment system based on their pre-existing culture of direct observation and frequent feedback.

“The new system has led to increased feedback to residents as well as resident accountability to obtain feedback on a regular basis,” she says. “It has further cemented the partnership of the faculty and residents as they develop the required competencies. This has fostered more conversation around learning, which has been beneficial to everyone involved.”

Approximately 20 per cent of McMaster anesthesiology residents are in the CBD hybrid, as the senior cohorts of residents are still in the traditional model.

Karen Raymer, program director of the anesthesiology residency training program at McMaster’s Michael G. DeGroote School of Medicine, notes the extent of supervision and feedback for anesthesia residents is unchanged under the new system.

“In anesthesia, we already had constant 1:1 supervision of faculty and residents, and residents were already getting daily feedback, so this is not a new feature of CBD for us,” she says.

The Royal College works with the program directors from each speciality for tailored systems of EPAs and milestones. However, there is flexibility for each program to tweak CBD and make it their own. This has been the case for the residency program in anesthesiology at McMaster.

Raymer notes the McMaster-specific model adopts the EPA and milestones from CBD, and maintains the previous global evaluation tool. The form used in the traditional stream assesses residents across the range of skills, from pre-op assessment and developing an aesthetic plan to technical abilities and patient communication skills.

“We want to make sure CBD is an improvement and enhances the educational experience by building on the solid foundation that has been built over decades,” says Raymer, who is also a clinical professor of anesthesia and an alumna of the anesthesia residency program at McMaster. “You don’t want to negate everything you know and understand about resident education and follow a new path without using all the experience and instincts that you have developed.”

Raymer notes the transition for faculty has been relatively straightforward due to the focus on readying for the roll-out.

“It is important to note that the preparation was several years in the making,” she says. “In particular, a lot of work and faculty development took place in the six months leading up to it, so I think all that work paid off in a relatively smooth transition. It’s also a gradual transition, which has been beneficial.”

There has been a significant amount of time and resources invested by McMaster faculty members and staff to ensure the conversion to CDB is as successful as possible. Preparation at the institution started years ago, with ongoing dialogue about the process with the Royal College and other residency programs.

Moyez Ladhani, McMaster’s director of CBD and a professor of pediatrics, is credited by his team members for serving as the university’s cheerleader and strongest advocate of the new system of learning for residents.

“Based on what I have seen, this is the right approach to usher us into the next century of teaching excellence,” he says. “We believe the tremendous work done by everyone involved, including faculty members and staff, is well-invested in this initiative that will change the face of how we optimally train medical residents in Canada.”

Jonathan Sherbino helped the Royal College develop CBD as a consultant during its early years. As chair of the emergency medicine specialty committee for the Royal College, he has done a soft roll-out of aspects of CBD in his division in preparation for the formal launch this July.

He acknowledges faculty members in his department have mixed reactions to the new system of postgraduate medical education.

“For people who are educational nerds like myself, there is some excitement about CBD,” says Sherbino, assistant dean of education research and an associate professor in the Department of Medicine at McMaster. “This is the first big change in how we train emergency physicians since we became a specialty. Those people are the true believers.

“At the other end of the spectrum are those who are asking why we are changing something when we have already been doing a fine job. That is a typical response of any type of change.”

Sherbino says in his division, elements of CBD have resulted in increased efficiency, as well as an improved educational environment based on feedback from both residents and faculty.

He notes that while a lot of intensive work has gone into creating and phasing in CBD, there’s a lot more yet to come.

“This is a common problem in curriculum redesign, as what you intend, what you deliver and what you experience is not a 1:1 correlation,” he says. “Before we pat ourselves on the back and say we’ve got this figured out, it is important to remember this is a dynamic process which will require ongoing surveillance, refinement and resolution of challenges. This will not be a linear course, but rather one that is quite dynamic.”

Read the story on family medicine and the Triple C Competency-based Curriculum here.