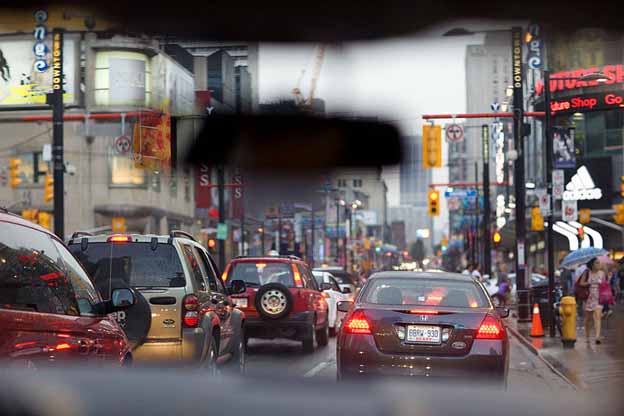 Traffic on Toronto's busy Yonge Street, as seen through the windshield of a car. New research from McMaster suggests drivers pay less attention in areas they are unfamiliar with or don't have a connection to, which can sometimes transfer the risk of harm from the suburbs to downtown.

A new McMaster study suggests children are at greater risk of being hit by vehicles driving through their neighbourhood than from drivers who live nearby, posing particular dangers in poorer, downtown areas where traffic levels tend to be highest.

The research, published online in the journal Social Science & Medicine, points to the issue of high traffic in low-income residential neighbourhoods, where drivers are more likely to take shortcuts to avoid congested main roads.

“Our findings suggest these drivers pay less attention in areas they are unfamiliar with or don’t have a connection to,” says Niko Yiannakoulias, an assistant professor in the Department of Geography & Earth Sciences and lead author of the study.

“Much of the traffic volume is displaced from one neighbourhood to another, which has the potential to sometimes transfer the risk of harm from the suburbs to downtown,” he says.

For the study, researchers used journey-to-work data collected as part of the Canadian Census to estimate volumes of local and non-local traffic throughout the city of Toronto.

They then analyzed data on child pedestrian injuries in various neighbourhoods as related to drivers who lived in the area or elsewhere.

“Motor vehicle commuters impose a burden on these neighbourhoods,” says Yiannakoulias. “The traffic levels are disproportionally high and local residents generally don’t benefit from people driving through their neighbourhood.”

He suggests some possible solutions might include lowering speed limits on neighbourhood streets or making it tougher for drivers to cut through neighbourhoods.

But the answers aren’t simple, he says. Further research is needed to more fully understand the geographic implications commuting may have on children.