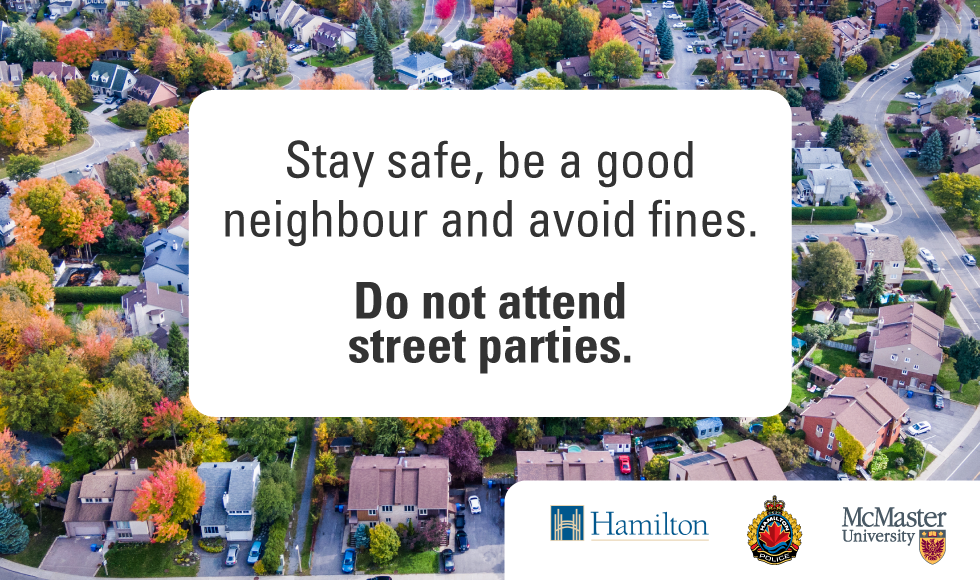 With the community in mind, the City of Hamilton, Hamilton Police, and McMaster are working together to discourage unsanctioned street parties.

The safety of students, neighbours and local community is our top priority.

With the community in mind, the City of Hamilton, Hamilton Police Services and McMaster are working together to discourage large, unsanctioned events like street parties, that put students and community members at risk. Students can help by being safe and being a good neighbour.

The City of Hamilton has also implemented a University District Safety Initiative in the neighbourhoods around the university, effective Sept. 28 to Oct. 2.

“When the university safety district initiative is in effect there is zero tolerance for noise and other infractions,” said Monica Ciriello, the city’s director of Licensing and Bylaw Services.

“This includes, excessive noise, attending or hosting a nuisance party, and failure to comply with a by-law or police officer and carries fines of up to $10,000.”

McMaster is reaching out to students in various ways to make sure they are informed about the new Hamilton bylaw and zero tolerance zone. This will include a message from the Dean of Students, social media posts and communications within student residences on campus.

McMaster is also engaging with students who live in the community and with neighbours, hand delivering messages about the new bylaw, and reminding students to be kind and respectful.

“We are asking students to avoid the extremely high risks associated with large gatherings, whether in Hamilton or in any community across Ontario,” says Sean Van Koughnett, associate vice-president and dean of students.

“We know that people come from many parts of the province when a street party is promoted and we discourage everyone from participating and running the risk of receiving fines that go as high as $10,000.”

“McMaster has been an important partner in encouraging students to be good neighbours,” says Hamilton Mayor Fred Eisenberger.

“Students are a wonderful and integral part of our community, and we need to help some students appreciate the importance of respecting the people, homes and properties in their neighbourhoods. This cooperation goes a long way in reinforcing the many positive contributions students make to our city.”

McMaster has not hosted a sanctioned “Homecoming” since 2019. In keeping with this practice, there will be no homecoming football game or other university activities this year. Even though there are no homecoming events at the university, Hamilton could still be the focus for some street events, which, in the past, have been organized and promoted by people with no connection to the university. McMaster does not support these types of activities and actively works with community partners to try and dissuade students from attending street parties which can also attract large numbers of people from outside of the city. This is a challenge many cities are facing, not just Hamilton.

“We urge all community members to become aware of Hamilton’s new nuisance party bylaw and its potential consequences,” says Hamilton Police Chief Frank Bergen. “The bylaw can mean large fines for anyone who attends a nuisance party, blocks traffic or roads or damages property. The best way to avoid these fines is not to go.”

Students can learn more about the City of Hamilton’s new nuisance party bylaw and University District Safety Initiative on the city website.