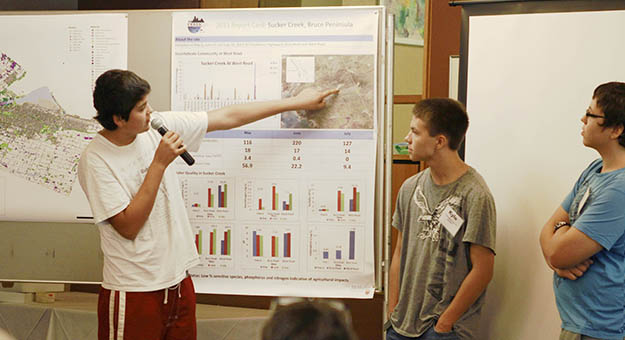 A team of high school students from the Saugeen Ojibway Nation teamed up with McMaster's URBAN initiative to study aquatic life in Sucker Creek. From left: Gubby McDonald, Kyle Robson and Christian Mackenzie.

Kyle Robson wanted to become a “citizen scientist” for one reason — to learn more about Sucker Creek, a Bruce Peninsula waterway where he spends many hot summer days hanging out with friends.

To do so, the 16-year-old decided to volunteer with URBAN First Nations, a new research and community partnership between the University and the Saugeen Ojibway Nation.

URBAN (Urban-Rural Biomonitoring & Assessment Network) is a hands-on initiative developed by a team of McMaster researchers in collaboration with the Bay Area Restoration Council and the Royal Botanical Gardens. It was designed to involve everyday citizens like Robson in studying and preserving wildlife and natural areas in Ontario. The Sucker Creek project was the program’s first venture in the Bruce Peninsula area.

“I spend a lot of my time in the water during the summer, and I wanted to know more about it,” explained Robson. “That’s why I wanted to get involved in this project, and maybe others in the future.”

In May, June and July, Robson and two other Saugeen Ojibway Nation high school students, Christian Mackenzie and Gubby MacDonald, collected water samples and examined aquatic wildlife along a portion of Sucker Creek near Highway 6.

On Wednesday, the student team presented its findings during a reception in the University Club. After analyzing their samples in a McMaster biology lab last week, the students discovered that phosphorous and nitrogen levels were higher where Sucker Creek runs close to farms in the area.

Patricia Chow-Fraser, director of URBAN and a McMaster biology professor, said the team’s findings are significant in themselves, but what may be more important is establishing a long-term connection with nearby communities.

“With this project, we wanted to show students and citizens in the Bruce Peninsula that they have the tools to do this kind of research, and that McMaster is here to help,” said Chow-Fraser. “This type of monitoring is often done after a road expansion, for example, but it’s important to monitor beforehand to have a clear environmental assessment. In the future, we’d love to have other communities reach out to us about doing similar projects.”

“Possibly because we have so much fresh water, we often take it for granted,” said Baker during his opening address. “This program is designed to engage students and the public … it’s a real opportunity for students to learn.”

McMaster researchers had collaborated with tribal elders to get the project up and running, and were invited to participate in a similar fire and water ceremony during one of their visits. An emeritus professor from the Faculty of Health Sciences, George Heigenhauser, lives near Sucker Creek and also worked on the project.

Funding for the summer research project was provided by the RBC Foundation and McMaster’s Faculty of Science.

Check out the volunteers and researchers in action with the videos below, and a special thanks to Emmett Fraser for the cinematography.