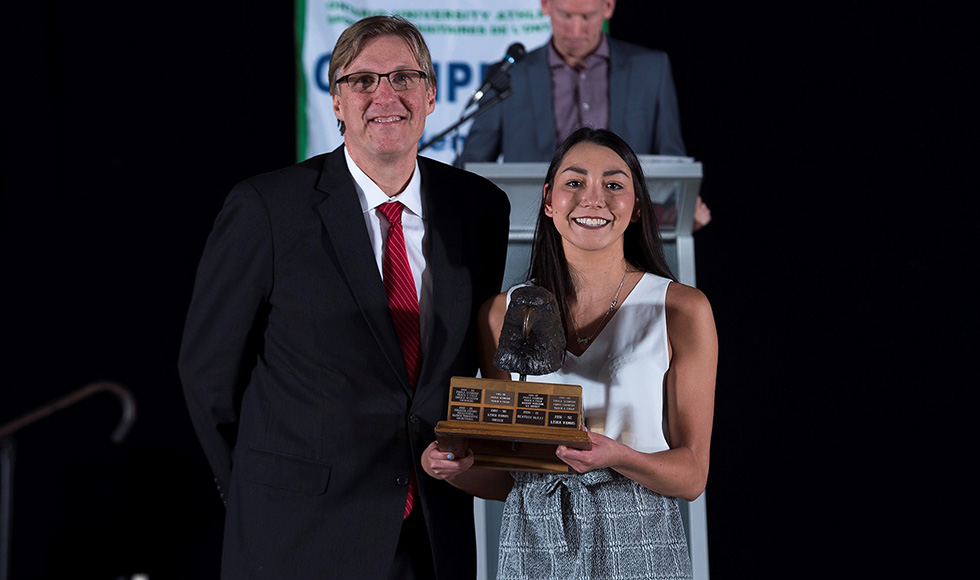 Chow became the first swimmer to win the Therese Quigley Award as McMaster’s female athlete of the year since Sarah Taylor shared the honour in 2010.

For his part, Raez Villanueva made history as the first cross country student-athlete in school history to win the Ivor Wynne Award as McMaster’s male athlete of the year since the honour’s inception in 1972.

He is just the second runner of any kind to win the award, joining sprinter and McMaster Hall of Fame member Milan Popadich, who claimed the award in 1981.

Recognized by her OUA peers with the Graduating Athlete of Distinction award at the conclusion of 2018’s conference championship meet, Chow broke a pair of OUA records in the 50m and 100m breast stroke events to win a pair of gold medals, adding silver in the 200m individual medley and contributions to silver and bronze-medal-winning relays in the 400 and 200m medley respectively.

She followed with a pair of medals at the U SPORTS Championships in Toronto, winning silver in the 100m breast stroke and bronze in the 50m event, while contributing legs to three separate relays and ultimately helping the McMaster women to seventh as a group at the national event.

Making his Marauders debut in 2017 after sitting out the 2016 campaign following a transfer from McGill, Raez Villanueva made his influence felt immediately, leading the Marauders to team gold at the Western Invitational and their home Bayfront Open, before winning individual silver and being named an OUA First Team All-Star at the conference championship.

Helping the McMaster men to a fourth-placed finish as a group at the U SPORTS Championship, and a narrow miss of the national podium, Raez Villanueva finished eighth individually and was named a Second Team All-Canadian for his efforts.

He was unable to attend Tuesday’s ceremony, and accepted his award via video message, as he was en route to the World University Cross Country Championships in St. Gallen, Switzerland with Team Canada.

The Dr. Edna Guest and Dr. Ray Johnson Awards, given annually to the graduating student-athletes who best represents the spirit of McMaster, were awarded to women’s rugby senior Lydia Hicks and football standout Mark Mackie.

Over her four years in maroon, Hicks was a key part of the women’s rugby squad, winning OUA medals each season, including gold in 2014 and 2015, along with McMaster’s first national championship in 2015. An outstanding student, she was recognized as an academic All-Canadian in all four of her years at McMaster. Hicks was also a very active member of the McMaster Athletes Care program as the women’s rugby team rep, and spent two years on the executive committee.

Mackie ranked fifth in the country with 10 tackles for a loss, while racking up 30 total tackles and six sacks in 2017 and earning McMaster’s nomination for the OUA’s J.P. Metras Trophy as Lineman of the Year and a spot as an OUA First Team All-Star. The Academic All-Canadian was recognized for his leadership of the football program with the team’s Stu Smith Coaches Award.

Mirroring the athlete of the year results, the Mel and Marilyn Hawkrigg Awards, which recognize the outstanding rookies of the season, were awarded to a male runner and a female swimmer, as Max Turek and Isabelle Lei took home the honours.

Making history as the first Marauders male winner of the OUA Rookie of the Year Award, Turek finished third overall at the OUA Cross Country Championship and was a conference all-star on the trails. He followed with a 20th overall finish at the U SPORTS Championship, finishing just .01 second behind the national rookie of the year. Turek finished third among juniors at the Canadian Cross Country Championships in November, and represented the country at the 2018 NACAC Championships on February 17, placing seventh and helping the Canadian junior men win gold.

Lei won OUA gold medal in the 200m freestyle and silver at the 100m distance, setting a McMaster record in the process. She also picked up two bronze medals while swimming in the relays, and helped McMaster to the team bronze medal while being named as the OUA Rookie of the Year.

The Joyce Wignall Award, presented to the team which demonstrates outstanding contributions to the McMaster and Hamilton communities, was awarded to the McMaster fencing team in recognition of their multifaceted outreach efforts this past season.

Keenan Jeppesen has been hired for the role of Associate Director, High Performance for the Department of Athletics & Recreation.