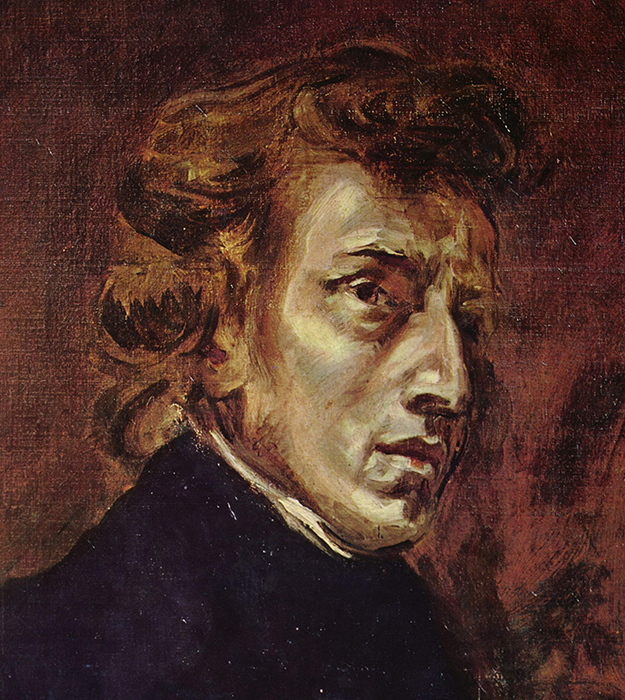 Frédéric Chopin (pictured) and Johann Sebastian Bach were the focus of a recent study led by McMaster researcher Michael Schutz, which examined the link between common human speech 'cues' and our emotional connection to music.

Music has long been described, anecdotally, as a universal language.

This may not be entirely true, but we’re one step closer to understanding why humans are so deeply affected by certain melodies and modes.

A team of McMaster researchers has discovered that renowned European composers Frédéric Chopin and Johann Sebastian Bach used everyday speech “cues” to convey emotion in some of their most famous compositions. Their findings were recently published in Frontiers of Psychology: Cognition.

Their research stemmed from an interest in human speech perception — the notion that “happy speech” for humans tends to be higher in pitch and faster in timing, while “sad speech” is lower and slower.

These same patterns are reflected in the delicate nuances of Chopin and Bach’s music, the McMaster team found.

To borrow from Canadian singer-songwriter Feist, we “feel it all” because the music features a very familiar cadence or rhythmic flow. It’s speaking to us in a language we understand.

“If you ask people why they listen to music, more often than not, they’ll talk about a strong emotional connection,” says Michael Schutz, director of McMaster’s MAPLE (Music, Acoustics, Perception & LEarning) Lab, and an associate professor of music cognition and percussion.

“What we found was, I believe, new evidence that individual composers tend to use cues in their music paralleling the use of these cues in emotional speech.” For example, major key or “happy” pieces are higher and faster than minor key or “sad” pieces.

The team also discovered that Bach and Chopin appear to “trade-off” their use of cues within the examined music.

Sets with larger pitch differences between major and minor key pieces had smaller timing differences, and vice versa. This may reflect efforts to balance the cues to avoid sounding trite, Schutz explains.

Schutz and Matthew Poon, a Music alumnus from the Class of 2012, began analyzing a complete body or “corpus” of three 24-piece sets by Chopin and Bach several years ago, as part of an Undergraduate Student Research Award (USRA) project. Poon is now a graduate student at the University of Toronto.

The pair analyzed all 48 preludes and fugues from J.S. Bach’s Well-Tempered Clavier (Book 1); as well as all 24 of Chopin’s Preludes (Op. 28). The pieces were chosen based on their historical significance and enduring popularity amongst performers, educators and audiences.

In order to ensure the tonal areas of each composition stayed in their stated keys, analysis was confined to the first eight complete measures — excluding pick-ups — from each of the 72 pieces.

Previous research on musical emotion has often involved manipulating existing melodies and compositions, Schutz explains. For example, transposing a melody higher or playing a song slower than written, in order to explore changes in emotional responses.

The McMaster-led study built upon that work by exploring how Bach and Chopin used emotional cues in their actual work — music still performed and enjoyed on a regular basis, hundreds of years after it was composed.

Can the same research be applied to modern pop music? Schutz says yes, although it’s much easier to analyze classical music based on the availability of sheet music and detailed notation, he offers.

Click here to read more about the MAPLE Lab’s research into music and emotion.