Chemists create new materials from molecular rings that assemble themselves 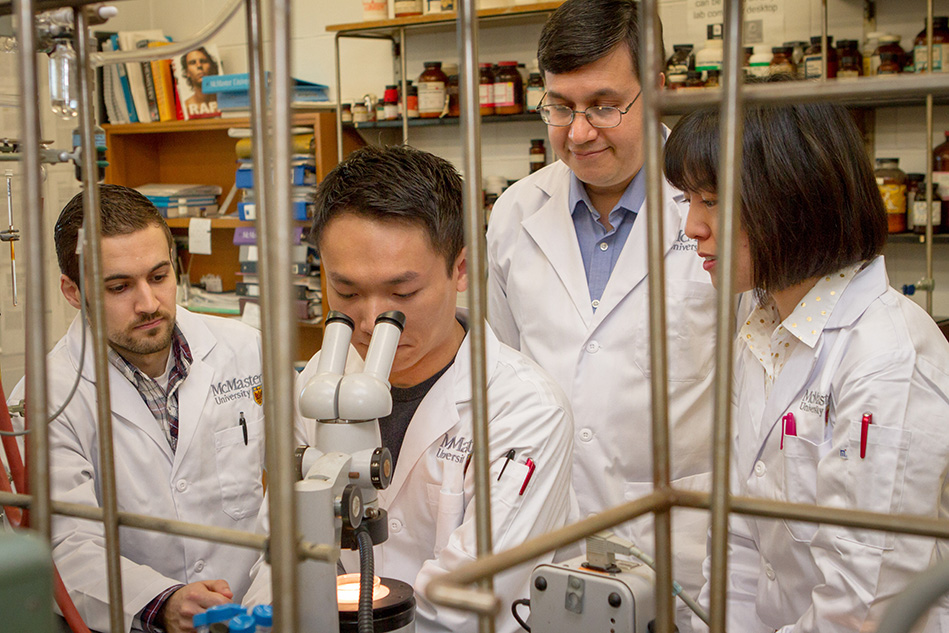 Imagine throwing Lego pieces into the air and seeing them fall to the ground assembled into the shape of a house or plane.

Nature effortlessly does the equivalent all the time, using molecules as building blocks.

The right combination of ingredients and conditions spontaneously assembles structures as complex as viruses or cellular membranes. Chemists marvel at this very efficient approach to creating large molecular structures and keep searching for new ways to emulate the process using their own components.

Now, in a McMaster University laboratory, chemistry researchers have managed to coax molecules known as tellurazole oxides into assembling themselves into cyclic structures – a major advance in their field that creates a new and promising set of materials.

“This is a seed we have found – one we have never seen. It has sprouted, now we need to see how tall the tree will grow and what kind of fruit it will bear,” says Ignacio Vargas Baca, an associate professor in McMaster’s Department of Chemistry and Chemical Biology. “Once we understand the properties of these new materials, we can look at their potential applications.”

The discovery is published today in the prestigious science journal Nature Communications.

Barca’s group works in the realm of supramolecular chemistry, where the key is to exploit the forces that keep molecules together. Hydrogen atoms, for example, can form strong bridges between water molecules or pairs of DNA strands.

Earlier, the realization that atoms of iodine and bromine can act in a similar way had sparked great excitement in chemistry circles, giving rise to the hot field of “halogen bonding,” where other researchers have had success with enormous assemblies, but have had difficulties controlling the association of just a few molecules.

Meanwhile, Vargas’ group moved over one column on the periodic table of elements to work with chalcogens instead.

They discovered that certain molecules that contain the element tellurium assemble automatically into rings in solution, a success that has no rival in halogen bonding and constitutes a significant advance in supramolecular chemistry.

For now, he and his team envision uses in areas as diverse as communication technologies, gas storage and catalysis.

Vargas credits these discoveries to McMaster’s facilities and expertise in nuclear magnetic resonance and X-ray diffraction, and the undergraduate chemistry program’s emphasis on experimental education. He notes that Peter Ho, the article’s first author, did all his work on the paper as an undergraduate.

Vargas’ research was funded by programs of the Natural Sciences and Engineering Research Council of Canada, including the Discovery Grants, Postgraduate Scholarships, and the Summer Undergraduate Research Awards, as well as McMaster’s McWork program.