Charles Juravinski: Honouring the life and legacy of a hometown champion of health research and health care 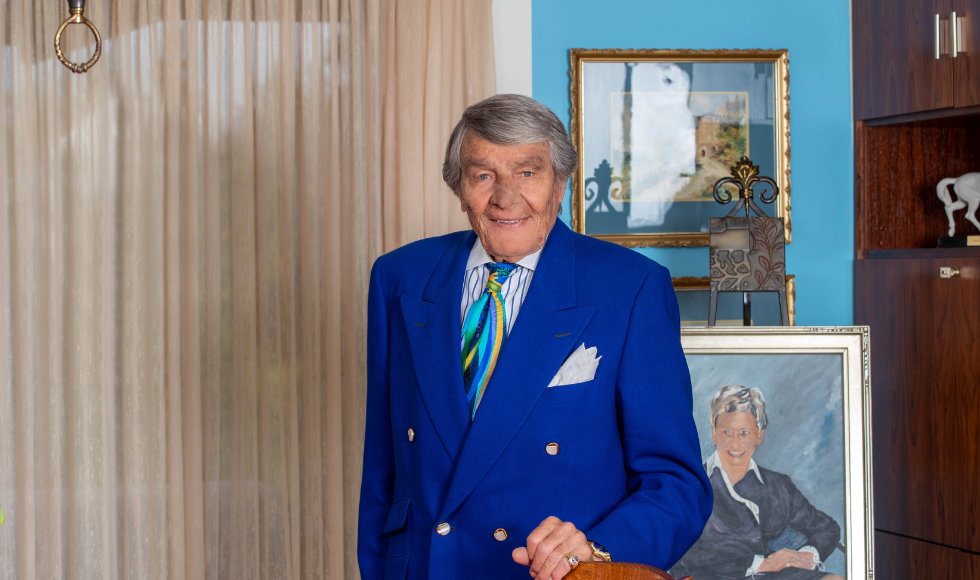 Businessman, philanthropist, entrepreneur and lifelong Hamilton lover – Charles Juravinski never tired of praising his adopted hometown, nor of sharing his good fortune with the people living in it.

“It brings us great pleasure to think that when we are gone, our legacy to this community may be measured in the good health of those who come after us.

As a couple, our most important lesson has been this: the greatest pleasure in life, and the most powerful force for good in the world, is sharing.”

-Charles and Margaret Juravinski
from a Letter to the Community, May 2019

Businessman, philanthropist, entrepreneur and lifelong Hamilton lover – Charles Juravinski never tired of praising his adopted hometown, nor of sharing his good fortune with the people living in it. Whether he was walking the halls of a city hospital or on the phone with politicians or university presidents, he loved to talk about all of the attributes that make Hamilton great. He was especially fond of the partnerships that brought the best people in health research and health care together for the greater good.

We were saddened to learn of the passing of Charles Juravinski on February 16, 2022. Survived by his wife of 65 years, Margaret, he passed away, perhaps fittingly, at Margaret’s Place – a hospice named in Margaret’s honour at St. Joseph’s Villa in Dundas. Charles’ passing came just a day after he and Margaret had announced a new $5.1 million Valentine’s Day gift to support health research across the city through their continued investments in the Juravinski Research Institute.

The Juravinski Research Institute was established in 2019, when Charles and Margaret announced an endowed legacy gift of $100 million. The endowment was designed to generate approximately $5 million annually to support health researchers at Hamilton Health Sciences, McMaster University and St. Joseph’s Healthcare Hamilton. The Juravinskis’ estate gift is one of Canada’s largest-ever legacy gifts.

Some speculated that this would be the couple’s penultimate philanthropic gift, but since that time, they have continued to make additional in-life donations of more than $11.4-million to kickstart vital research projects related to COVID-19, Brain Health, Child and Youth Health, Burn Trauma, Integrated Care and more.

“Through our lives in Hamilton we have been fortunate to build wealth to share it with the community that helped us to prosper, and in our charity work, we have had the chance to meet and learn about many talented and devoted researchers. We want them to have the chance to do their very best work,” the couple said in one of their letters to the community published in April 2020.

While the Juravinski Research Institute has been the couple’s philanthropic focus for the past few years, in the decades preceding they established a powerful philanthropic legacy in Hamilton, which includes giving more than $63.7 million to Hamilton Health Sciences, McMaster University and St. Joseph’s Healthcare Hamilton while also supporting many other worthy causes and organizations in the city.

Born in Saskatchewan in 1929, just as the Great Depression started, Charles had a challenging upbringing as his family struggled to make ends meet. In 1942, his family relocated to Hamilton.

Charles spent his early career working in construction, establishing WilChar Construction Limited with his brother-in-law. When the company closed in 1971, Charles took a chance and launched the Flamboro Downs racetrack. Charles and Margaret managed the business for 30 years until they sold it to Magna Entertainment in 2003.

“Hamilton has lost a remarkable man today. Charlie Juravinski was a child of the great depression who was determined to work hard, take risks, and give back. With every donation he and Margaret made, Charlie had plans, expectations of how that gift would improve the lives of people in our community and those around the world, too. He asked smart questions, encouraged Hamilton’s hospitals and universities to think differently, to collaborate more frequently. And every time he and Margaret gave, Charlie encouraged others to give back, too. He was quick to say, it didn’t matter how much, he just wanted people to experience the joy of giving. I feel fortunate to have been his friend, colleague and advisor, though truth be told, he was often the one doing the advising. I look forward to seeing Charlie’s legacy live on through the care provided at our hospitals, hospices and care centres in Hamilton and through the work of the Juravinski Research Institute.”

“From the first time I met Charles Juravinski, he always pushed us to be better, to collaborate and put our researchers and our expertise in health research and health care on the international stage. He was the ultimate Hamilton champion, he cared deeply about the people in this community, and he wanted the world to know what tremendous work was being done here.”

“Charles Juravinski was relentless in his belief that the depth and breadth of knowledge, innovation and partnership here in Hamilton was special and something to be exceedingly proud of. He was always curious to know more and was passionate about the possibilities his philanthropy could inspire. He has left a legacy to which we can all aspire.”

“Charles Juravinski was a true original – his distinctive style and manner were well known and admired across our City. Together with Margaret, their philanthropy in health care and innovative research has positively influenced the lives of countless patients and their families in our region, and across our Province.  Just as important Charles and Margaret have helped create a legacy that will continue to heal, inspire and provide hope for patients and families for many years to come.”

“Long before I had taken on this role at St. Joe’s, I had heard so much about the generosity of the Juravinskis – a couple who chose time and time again to invest in creating a healthier future for all. Charles also had an infectious way of challenging the institutions he and Margaret supported to think differently, to collaborate more, to share often, and to give selflessly. Those important lessons will continue to guide us, long after his passing. Our hearts go out to Margaret, who has lost her lifelong partner, and to our community which has lost one of its biggest cheerleaders.”