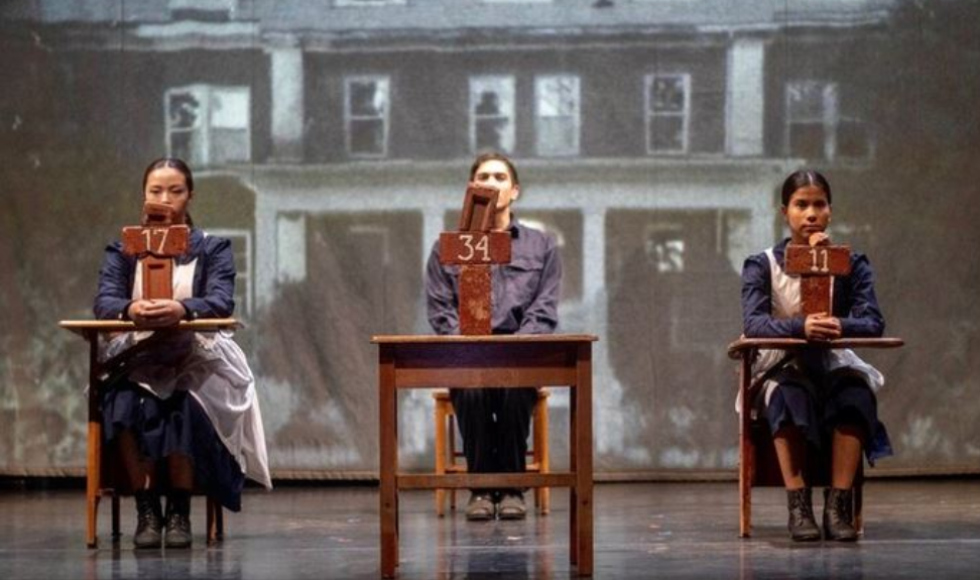 In the Theatre for Young Audiences category, The Mush Hole, which was presented in partnership with Toronto’s Young People’s Theatre, won for:

Smith, McMaster’s chancellor and a multidisciplinary artist from the Kahnyen’kehàka Nation (Six Nations of the Grand River), created The Mush Hole to bring awareness to theatre audiences about survivors’ experiences at the Mohawk Institute. Canada’s oldest residential school, the Mohawk Institute was nicknamed the Mush Hole by those who attended for the mush that was regularly served at meals.

The work, which was performed at McMaster in November 2018 as part of The Socrates Project and further developed during a residency at the university’s black box theatre, combines dance, multimedia, video projection and music to recreate the environment and specific rooms in the school where experiences took place.

Operated in Brantford from 1828 to 1970, the school worked to assimilate First Nations children from Six Nations and other communities in Ontario and Quebec, severing their connections with their families and culture and leaving a legacy of multi-generational trauma from abuses that included sexual assault, food deprivation and corporal punishment.

At the school, children were identified only by institutional numbers. Scratches on bricks, pencil scribbles and hidden drawings are still visible on the walls today.

Smith’s great-grandmother and grandfather attended the Mohawk Institute, which is now the site of the Woodland Cultural Centre.

“The Mush Hole was the first time I focused my narrative solely on the Residential School experience,” says Smith.

“I was connecting to my family history, which was just as silenced as the truths hidden in the school. My great-grandmother and my grandfather’s experiences were not shared with the family.”

Smith began working on the piece in 2016, after participating in The Mush Hole Project. Organized by the University of Waterloo in partnership with the Woodland Cultural Centre, the initiative invited multidisciplinary artists to offer an artistic response to locations on the grounds and within the school.

“I chose to work in the Boy’s Playroom, in the basement room that once housed a jail cell where many physical abuses took place,” she explains. “Collaborating with three Six Nations youth dance artists, we presented a 15-minute performance installation that carried much of the imagery, scene content and initial movement gestures that would later inform my larger production of The Mush Hole.”

Along with workshops, interviews and archival research, Smith and her ensemble also connected directly with Survivors, including Roberta Hill, Jon Elliot, Sherlene Bomberry, Doug George-Kanentiio and Geronimo Henry, who spoke with the artists about their experiences and attended rehearsal run-throughs of the work.

“What is unique about The Mush Hole is that we get a glimpse at the family breakdown, we see the impacts on the parents at home without their children – we represent two generations of Survivors,” says Smith.

“Generally, when people learn about the Residential School legacy from textbooks or video what is missing is the visceral impact. Through our performances, audiences experience the emotional journey of the characters.”

Ultimately, says Smith, the work offers a chance for audiences to learn – and to heal.

“The Mush Hole reflects the realities of the Mohawk Institute Residential School experience and offers a way to open dialogue and to heal, through acknowledgement and honouring the spirit of Survivors and families that were impacted.

“Opening a small window into the atrocities inflicted on thousands of Indigenous children, it attempts to close the door on historical amnesia.”

While The Mush Hole’s fall and spring 2020/2021 touring has been postponed because of the COVID-19 pandemic, Kaha:wi Dance Theatre is developing online materials for the work in partnership with the Woodland Cultural Centre. To learn more, and to help support this work, visit Canada Helps.