Celebrating the legacy of Henry Thode 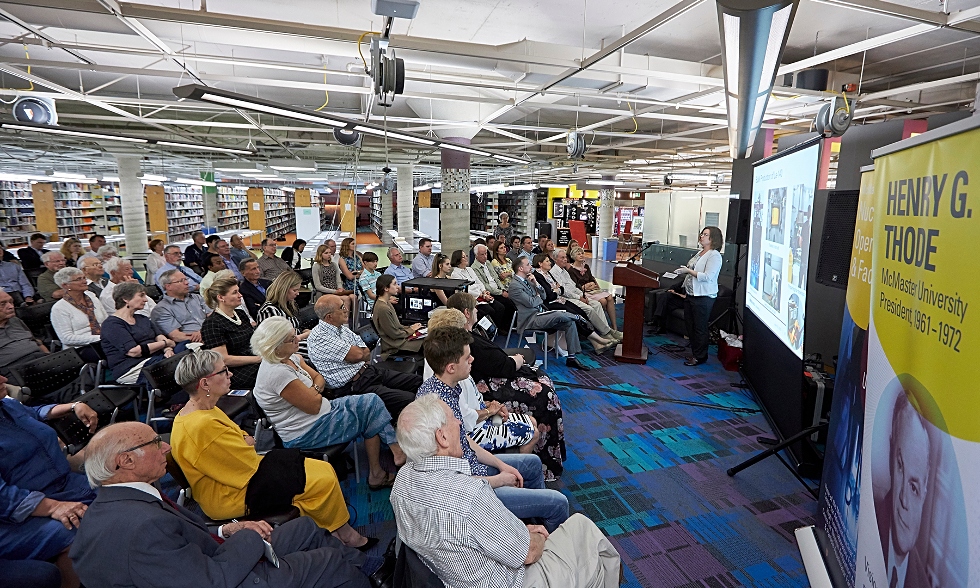 No other figure has left so indelible an imprint on McMaster as Henry Thode.

An internationally celebrated geochemist and nuclear scientist, and president of McMaster from 1961-1972, Thode set in motion an unprecedented era of expansion that helped transform McMaster from a small Baptist university into an international research and teaching powerhouse, now ranked among the best universities in the world.

Recently, McMaster faculty, staff and alumni, along with members of the Thode family, came together to honour the extraordinary vision of Henry Thode and celebrate two significant milestones connected to his legacy – the 60thanniversary of the McMaster Nuclear Reactor and the 40thanniversary of the H.G Thode Library of Science and Engineering.

“More than any other single leader, Henry Thode dominates any discussion of the giants of McMaster’s history,” said Andrew Colgoni, services librarian at Thode Library who gave opening remarks at the event. “It is an honour to welcome you all here to pay tribute to the rich legacy of Dr. Thode who contributed so much to the remarkable evolution of our university.”

Learn more about the extraordinary life and career of Henry Thode

The event, which was hosted by McMaster’s Alumni Advancement office in partnership with McMaster University Library and the McMaster Nuclear Reactor (MNR), featured talks by James Greenlee, a historian and three-time McMaster alumnus, and Andrea Armstrong, a research scientist at the MNR.

Greenlee, author of McMaster University 1957-1987: A Chance For Greatness, spoke about the period of tremendous growth that took place under Thode’s leadership which, in addition to the building of the nuclear reactor, included the establishment of McMaster’s world-renowned medical school, the construction of the McMaster Health Sciences Centre,the Arts complex,and what are now known as theJohn Hodgins Engineering Building and the AN Bourns Science Building.

Greenlee says that, in many ways, the McMaster Nuclear Reactor was the embodiment of Thode’s philosophy of “targeted excellence,” the idea that McMaster’s success would lie in developing carefully defined areas of academic and research strength that would enable interdisciplinary collaboration and foster exchange between departments.

“The McMaster nuclear reactor was unquestionably the brightest gem in McMaster’s diadem – a symbol of the university’s take-off into sustained growth as a research-intensive institution,” says Greenlee.

“Harry understood that it was precisely the kind of instrument that McMaster needed in order to develop in the way he envisaged,” he continued. “It had the potential for manifold research applications, and such a facility could draw together numerous departments into close collaboration and mutual understanding.”

Armstrong, also an adjunct professor of chemistry at the MNR, spoke about how the building of the Nuclear Reactor – the first university-based reactor in the British Commonwealth and Canada’s only research reactor – has paved the way for cutting-edge research in a number of areas.

She described the diverse activities currently taking place including the production of life-saving medical isotopes used in the treatment of certain cancers; partnerships with industry, such as testing engine turbine blades for commercial aircraft, and analyzing core samples from mines, among many projects; and about the numerous research collaborations which continue to bring scholars from across Canada and the world to McMaster to use the MNR’s unique facilities.

Armstrong also spoke about the range of academic programming made possible by the university’s nuclear infrastructure such as McMaster’s Graduate Program in Radiation Sciences and Health and Radiation Physics.

“The McMaster Nuclear Reactor is the launching pad for the scholarly and professional careers of engineers, physicists, applied radiation scientists, medical physicists and others who come to McMaster because it provides a one-of-a-kind experience in Canada,” said Karin Stephenson, manager of commercial operations at the MNR who also spoke at the event.

“The reactor has now proven its value many times over, and our contributions in fields from nuclear energy to medical isotope production have never been more relevant,”she adds. “So, we’re looking forward to an exciting future as we move into the McMaster Nuclear Reactor’s seventh decade and beyond.”

This event was part of a special year of programming aimed at celebrating the ways in which the Library supports research, teaching and learning related to Science, Technology, Engineering and Math (STEM). Events are presented in partnership with the Health Sciences Library and the Faculties of Science and Engineering.