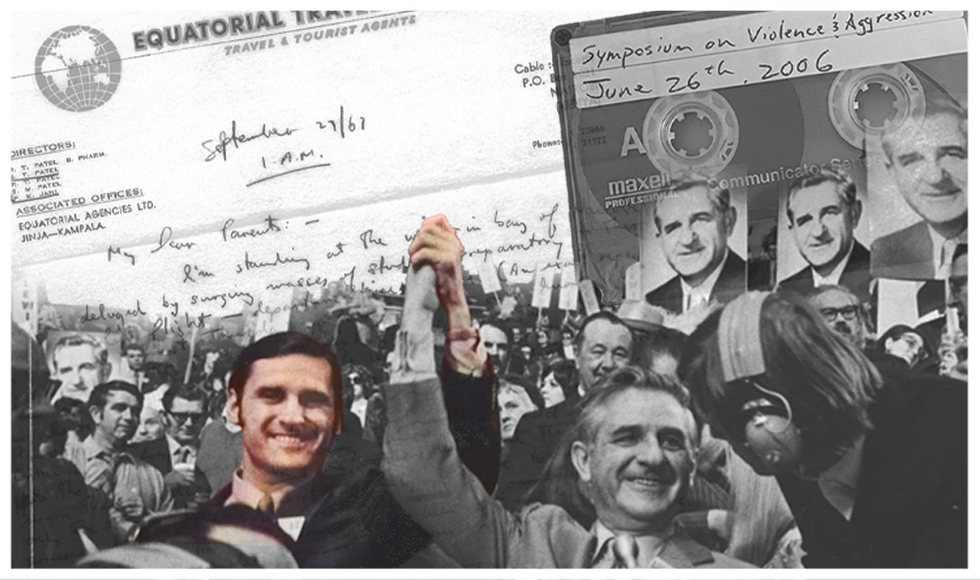 From his campaign to galvanize global action on HIV/AIDS in Africa to addressing the genocide in Rwanda through his work with the United Nations, Stephen Lewis’ archive offers valuable insight into some of the world’s most pressing social and global health issues.

It was May 25, 1979, when globally renowned humanitarian, diplomat and activist Stephen Lewis first became a part of the McMaster University family.

During the convocation ceremony that day, Lewis, who was receiving the first of his 42 honorary degrees, spoke to graduates and their families with his trademark eloquence.

“This is a stunning moment of gratification for me,” he said. “Scarce to be believed that an infidel, resisting the enveloping shrouds of obscurity, can still enter the kingdom of heaven.”

In 2006, Lewis returned to McMaster, this time as the inaugural scholar-in-residence in the Faculty of Social Sciences.

Now, 42 years after receiving his honorary doctorate, Lewis continues to make history at McMaster with the formal announcement of the significant gift of his archive to the university library’s  William Ready Division of Archives and Research Collections.

“I’d like to turn this archival ceremony on its head,” says Lewis, who continues to call his beloved Toronto home. “In normal circumstance, it’s the university that expresses appreciation. That will doubtless follow.

“But as much as McMaster may luxuriate in another archive, I’d like to say what a thrill it gives me to have McMaster’s stamp of approval. I’ve lived my adult life seeking academic legitimacy. Now, finally, it comes by way of the McMaster archives. I’m palpitating with joy.”

McMaster President David Farrar says the university is honoured to house and preserve this important archive.

“Mr. Lewis is a longtime friend and supporter of McMaster University, so we’re delighted to be able to give back in this small way by ensuring his life’s work is carefully archived and available for study,” Farrar says. “We can all learn from this tremendous Canadian who has devoted his life to public service and to changing our world for the better.”

A renowned orator, Lewis’s storied career is also captured in more than 1,500 individual speaking notes, as well as recorded versions of his speeches.

“It is difficult to describe the thrill of being the first person to look upon the long documentary history of Mr. Lewis’s extraordinary life and career as a politician, humanitarian and activist,” says Long, who vividly recalls being entranced as a teenager while hearing Lewis speak at a Peterborough lecture hall in 2006.

“It is no doubt that much of this rich archival resource will continue to inspire and educate generations of students and researchers here at McMaster.”

A life of public service

Stephen Lewis is a household name not only in his native Ontario, but across Canada and in many countries around the world.

Lewis is the co-founder and board co-chair of the Stephen Lewis Foundation, and he is the co-director of AIDS-Free World, an international advocacy organization.

Lewis is the also the author of the best-selling book, Race Against Time, which came from his inspiring 2005 Massey Lectures focused on raising awareness and promoting a message of hope during the AIDS epidemic in Africa at the time.

Lewis was leader of the Ontario New Democratic Party from 1970 through 1978, during which time he became leader of the official Opposition.

Peter Graefe, an associate professor of political science in the Faculty of Social Sciences, says Lewis’s life has been one of working in the interests of the public good.

“There is so much in what Stephen Lewis has accomplished that speaks to our immediate challenges,” Graefe says.

“Global health and pandemics? His papers when UN special envoy for HIV/AIDS. Black Lives Matter? His papers around his Report to the Premier on Racism in Ontario. Canada at the UN? The future of the NDP and Canadian social democracy? These papers promise to provide a wealth of insight in our understanding of the past, but also to animate our understanding of pressing public questions.”

The availability of Lewis’s private and public records will provide a rich source of material to better understand a plethora of issues, from Canada’s role in international humanitarian aid to the emergence of Africa as an economic and political force of the next century, says Susan Watt, a professor emerita of the School of Social Work.

Among Lewis’s many accomplishments, the most significant is his ability to open hearts and minds, especially those of young Canadians, Watt says.

“While he was a McMaster scholar in residence in the Faculty of Social Sciences, students had an opportunity to engage with him in both structured and spontaneous ways on a range of social and political issues and found him to be an inspiring and demanding scholar,” Watt says.

“He demonstrated that scholarship could be both meaningful and provocative; that disagreement need not be malevolent, and that principles are worth fighting for.”

Among the many significant materials contained in the Stephen Lewis collection, are the papers of his father, David Lewis. Like his son, David left an indelible mark on Canadian political life as leader of the federal New Democratic Party and a tireless voice for working Canadians.

The Stephen Lewis archive continues to be prepared for its formal debut. Staff at the library look forward to making the archive available, says McMaster University Librarian Vivian Lewis.

“We are diligently working towards the day we can unveil the incredible items housed in the Stephen Lewis archive for research and study,” Lewis says.

“The value of making this vast array of material representing his life’s work open to the McMaster community and beyond cannot be overstated. Our archives are enriched because of this important gift, and we thank Mr. Lewis for entrusting us with keeping his work available to generations to come.”