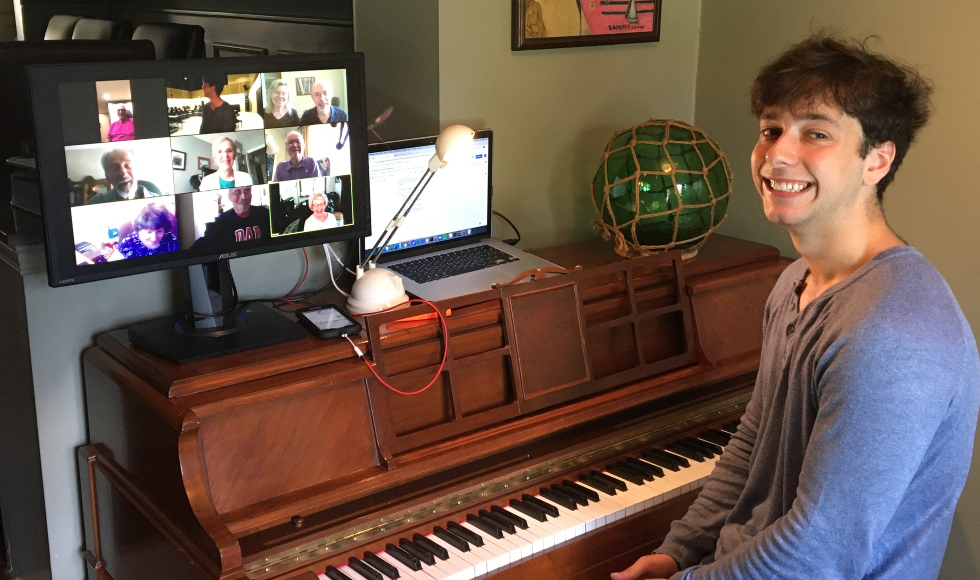 Arts & Science student Zachary Levine started the Hamilton Parkinson's Chorus in September 2018. Since McMaster suspended in-person activities in March, the group has had 15 rehearsals via Zoom.

Like most choirs, the Hamilton Parkinson’s Chorus starts its rehearsal with warm-ups – loosening up muscles, stretching and easing into singing with gentle humming, buzzing and breathing.

For folks in this particular choir, though, the warm-ups go a little farther than simply getting ready to sing: they’re actually therapeutic, based on speech-language exercises that help people with Parkinson’s deal with the effects of the disease, which include muscle tremors, stiffness and difficulty swallowing.

Since the chorus was launched in September 2018 by Zachary Levine, a student in McMaster’s Arts & Science program, people with Parkinson’s, and their caregivers or spouses, had been meeting once a week on campus until the COVID-19 pandemic suspended all in-person activities.

And because the benefits – both physical and social – of singing is well established for Parkinson’s patients, Levine knew he had to find a way to keep the choir going.

“We took two weeks off, but after that, we were back – this time on Zoom,” Levine says. “It was good to connect people again – we wanted to make sure we reached people who might have been socially isolated.” But singing as a group on Zoom isn’t easy: there’s a lag between what you hear and what you sing, so the sound gets jumbled and confusing. To counteract this, Levine mutes everyone but him, and plays the piano – so people can sing along with him, but can’t hear everyone else.

At rehearsals, which happen on Wednesdays at 3:30 and last about 70 minutes, choristers spend 20 minutes on a series of warm-ups – everything from massaging their faces to saying tongue twisters – things that help with singing, but are also shown to strengthen the muscles that can be affected by Parkinson’s.

“Some people with Parkinson’s lose the ability to swallow,” explained choir member Norm Jackson in a video made last year. “The same exercises to strengthen that part of your body are the same exercises you use in singing. My voice right now is a lot clearer than when I came in.”

Below: The Hamilton Parkinson’s Chorus in April 2019

Following the warm-up, Levine picks 10 songs from a binder of 60 songs or so by musicians like the Beatles, Simon and Garfunkel, and Neil Young – songs that are familiar to the majority of choristers, so there isn’t the challenge of learning new music: just the fun of singing together.

The chorus gets about 11-15 people out each week. And far from Zoom hindering the choir, holding rehearsals online has made them more accessible, since choristers don’t have to leave home to participate.

“People love that they can participate from anywhere – they’ve even been phoning in from their cottages,” laughs Levine. “We’ve seen our numbers grow because the barriers to accessibility have decreased. Maybe we’ll keep a virtual option open even when we can meet again in person.”