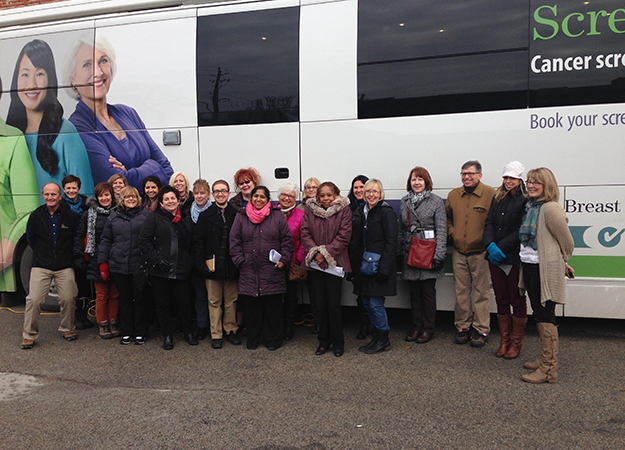 'It was humbling to be reminded of how health is about much more than what we offer as clinical practitioners' said Dr. Cathy Risdon, family physician at McMaster Family Practice and associate chair, academic in the Department of Family Medicine. 'This was a clear invitation to think about how we can be an asset to downtown communities.'

“Why have a meeting when you can have a party?”

David Derbyshire, community developer with the Social Planning and Research Council of Hamilton (SPRC), smiles widely as he explains the reasoning behind using a party and social events to truly spark community development.

“When it’s something like a block party, residents on the fringes, those who are hesitant, become engaged when they’re invited in to have a meal” he said. “They become part of the community.”

Derbyshire, along with Brent Browett from the City of Hamilton Public Health Services, was leading a group of staff, faculty and family medicine residents from the Department of Family Medicine on a neighbourhood bus tour of Hamilton.

Learning from the experiences of neighbourhoods involved in the Neighbourhood Action Strategy, the group was exploring how to use the assets within the department to partner with Hamilton neighbourhoods in their mission to become healthier places to live, work and raise a family.

During the three-hour tour, the group visited the Riverdale, McQuesten, Crown Point, Gibson/Lansdale and Beasley neighbourhoods of Hamilton. Hearing from residents of each area, they learned about initiatives that were developed and fostered by the neighbourhoods.

One such example was McQuesten’s community garden started by residents in response to food security challenges arising from having few nearby grocery stores.

“It’s two and half kilometres to the nearest grocery store” said Derbyshire. “Imagine making that trip as a single mom with three kids in the middle of January on public transit.”

According to Derbyshire, the key to these success stories is that the strategies to address an issue came from within the neighbourhoods. The residents define the issues. Then partner agencies, like McMaster University, assign their unique assets based on the direction set out by the residents.

“Nothing about us, without us” is how he described it.

For Dr. Cathy Risdon, family physician at McMaster Family Practice and associate chair, academic in the Department of Family Medicine, the experience was important ahead of the move to a new campus and neighbourhood.

“It was humbling to be reminded of how health is about much more than what we offer as clinical practitioners” said Risdon. “This was a clear invitation to think about how we can be an asset to downtown communities.”

The McMaster attendees of the bus trip were the second group in a month to take the neighbourhood tour. They ranged from support staff and administrators, to physicians, nurses and clinic managers.

For the Department of Family Medicine, the opportunity to become a member of a new community will present itself early in 2015. The McMaster Health Campus under construction in downtown Hamilton, at the corner of Bay Street South and Main Street West, will be the Department’s new home.

In fact, the department has many homes. With seven teaching sites across southern Ontario, training new family physicians, it’s hard to say the department has a single home base. However, the Health Campus will house the department’s central administrative, research and education staff. In addition to that, some clinical services delivered by the department will be relocating to the campus.

McMaster Family Practice and the Maternity Centre of Hamilton will both operate out of the campus, adding a new chapter to their histories of providing direct care to people in and around Hamilton.

Derbyshire commended McMaster, the City of Hamilton and the neighbourhoods for building a strong relationship. There is regular dialogue happening where researchers from across McMaster’s faculties bring project ideas to the community for early input and direction, and the community brings ideas for potential research to the University.

The commitment and passion seen in the neighbourhoods may inspire even more engagement than anticipated.

“The volunteers truly want to make a difference for their friends and neighbours” said Clareen Akshinthala, administrative coordinator within the Division of Palliative Care. “I really want to get more involved in both the neighbourhoods surrounding our new campus and my own neighbourhood after seeing what is happening in Hamilton.”