Billion-year-old water could hold clues to life on Earth, Mars 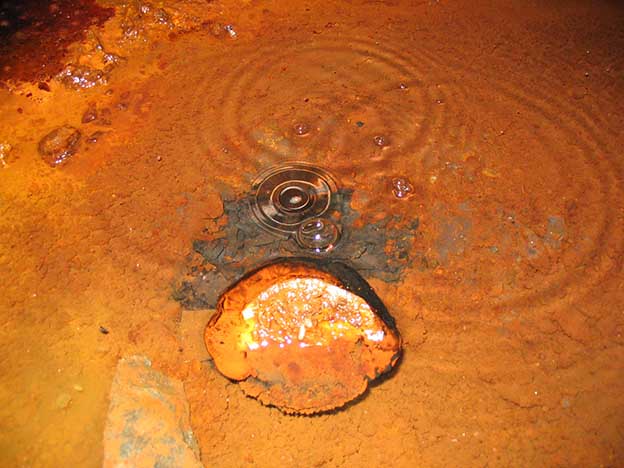 Gas that bubbles out of the floor in a deep mine has a chemical composition that can provide the food source for microbes living in deep, ancient fluids underground.

A team of Canadian and UK researchers has discovered what may be some of the oldest pockets of water on the planet – and they may contain life.

The team, which included McMaster’s Greg Slater, analyzed water pouring out of boreholes in a mine nearly 2.5 km below the ground in Timmins, located in northern Ontario.

Their findings, published May 15 in the journal Nature, could force us to rethink which parts of Earth are fit for life.

The researchers used isotopes of helium, neon, argon and xenon to demonstrate that the water was isolated deep beneath the Earth for an average of 1.5 billion years and possibly up to 2.6 billion years, making it some of the oldest water ever observed.

The water is also rich in dissolved gasses like hydrogen and methane, which could provide energy for microbes that may not have been exposed to the sun for billions of years.

For Slater, an associate professor in geography and Earth sciences, the work is just one aspect of a much bigger project.

“The overarching focus of my interest is to look at how microbial life exists in the deep subsurface of the Earth,” he says. “I try to detect these microbes and try to understand how they’re making a living, how they eat, how they process energy and so on.”

While he leaves analysis of the gases found in the water up to his collaborators at the University of Manchester, Lancaster University and the University of Toronto, Slater was in Timmins to collect samples both for this study and for other microbiology research.

“Imagine there is a series of isolated pockets of water, all of different ages and with different characteristics,” he says. “I try to find out if there are microbes living in some and not others, and then try to understand why they can live in some environments and not others.”

“It tells us things about the mechanisms of life that we can’t easily see on the surface of the Earth,” he says. “Photosynthesis and aerobic respiration are great ways to live, so that’s what we all do. But when you dig deeper you find pathways of life that include energy created through water-rock interactions or other means not found on Earth’s surface.”

If the water does contain microbes, it opens up the possibility that life in the subsurface of planets like Mars may also exist and may use similar strategies.

Below, Slater talks about collecting what could be the world’s oldest water for scientific analysis.