Bacteria detection by litmus: Inventing a new way to dye 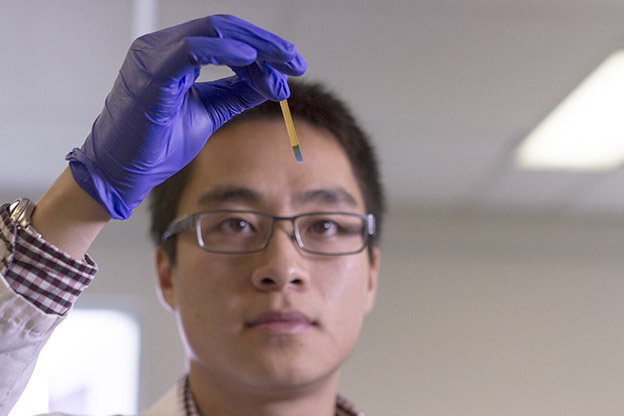 Kha Tram demonstrates a litmus test altered to detect the presence of E. coli. The yellow strip of paper has changed to purple, indicating the pathogen's presence in a liquid.

An international  team of researchers based at McMaster has figured out a way to adapt the good old litmus test so it can detect bacteria such as E. coli.

The team, which is connected through the Sentinel Bioactive Paper Network, set out to make testing water, juice, milk and other fluids faster, easier and more affordable, by using familiar litmus dyes and paper to indicate the presence of bacteria.

Since litmus testing measures the pH level of materials, their challenge was to translate the detection of bacteria into a pH response that would be plain for anyone to see.

Their work, published in the prestigious chemistry journal Angewandte Chemie, holds even greater promise as a platform that can be adapted to genetic and cancer testing.

Here, authors Yingfu Li and Kha Tram explain their work and its promise.