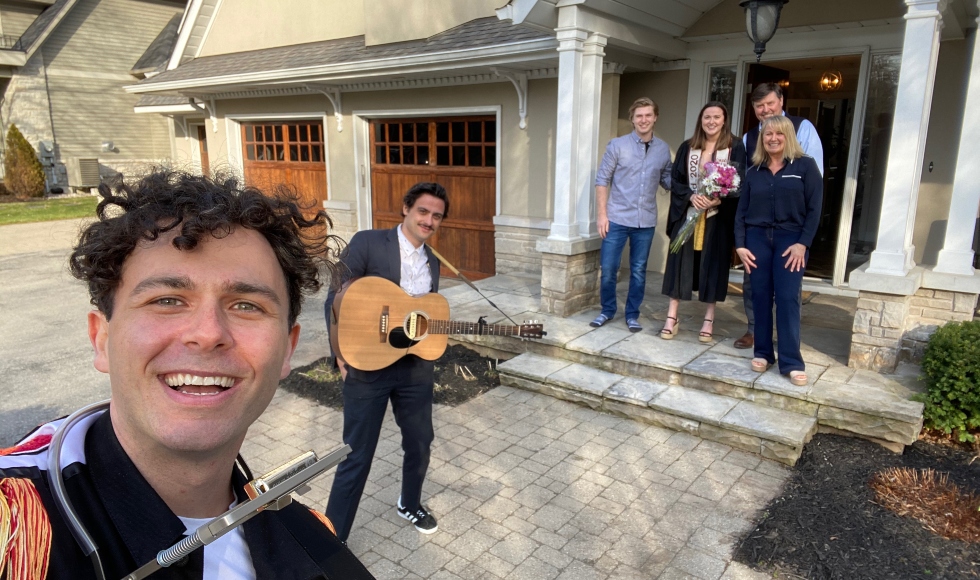 It’s been years in the making…

And I’d do it over again

It’s been years in the making

Ava Harrison thought it was just a mini graduation photo shoot, planned to make up for the fact that, due to the COVID-19 pandemic, her graduation from McMaster’s Bachelor of Health Sciences program had been moved online.

That is, until she realized that the “photographer” was actually Max Kerman from Arkells, and that he and bandmate Mike DeAngelis were on her parents’ front lawn singing their 2020 single, “Years in the Making.”

Inspired by the cancellation of in-person graduation ceremonies across the country, the band had reached out to McMaster – where the original members met and first began playing together – wanting to know if there was a graduating student who was a fan that they could surprise with a special graduation serenade.

“It’s springtime…and as we approach the end of the semester, we feel especially bummed for all the hardworking college students that won’t get a chance to properly celebrate with their family and friends,” explained Kerman in a video about the surprise that was broadcast on the Stronger Together, Tous Ensemble televised benefit for Food Banks Canada.

One of those hardworking students was Harrison – a dean’s honour list student who had been heavily involved in volunteering both on- and off-campus as a peer tutor, a volunteer at the Good Shepherd Centre, and a Welcome Week representative. She worked as a vision screener with the McMaster Paediatric Eye Group EYE-MAC project, an initiative set up to provide community vision screening for children.

Driven by a desire to work in women and children’s health, she’ll be heading to Oxford University in the fall to study clinical embryology.

When she found out that, because of the COVID-19 pandemic, McMaster’s June convocation had been moved online, she said she was initially disappointed, but quickly realized she was a small part of a bigger picture – one that, as a health sciences student, she was very familiar with.

“When you stop and think about the people on the front lines who are making incredible sacrifices, you realize that this is something we can all do to make everyone safer,” she says. “We’re doing this small part, while essential workers are doing a very big part.”

But while a formal convocation ceremony wasn’t in her immediate future, Harrison still managed to don a cap and gown – sent to her by Kerman, who, along with the band’s manager, worked with her family and boyfriend to plan the surprise front-lawn mini-concert.

Social distancing measures made getting the entire band together tough, so Kerman and DeAngelis each grabbed guitars, Kerman slung his harmonica around his neck and, as Harrison peeked out the door, the two launched into “Years in the Making” – which, as Kerman puts it, is all about “putting in the work” and has become an unofficial anthem for graduating students this year.

A song and a couple of selfies later, the pair headed off – and Harrison has a memory of a one-of-a-kind graduation moment she’ll never forget.

“I’ve been an Arkells’ fan since I started at Mac,” says Harrison. “They’re such genuine people, and that’s really communicated through their music. It was really fantastic that they’re that nice in person – and maybe even more so.