All work and some play: How Boardball’s overnight success turned into a viable business 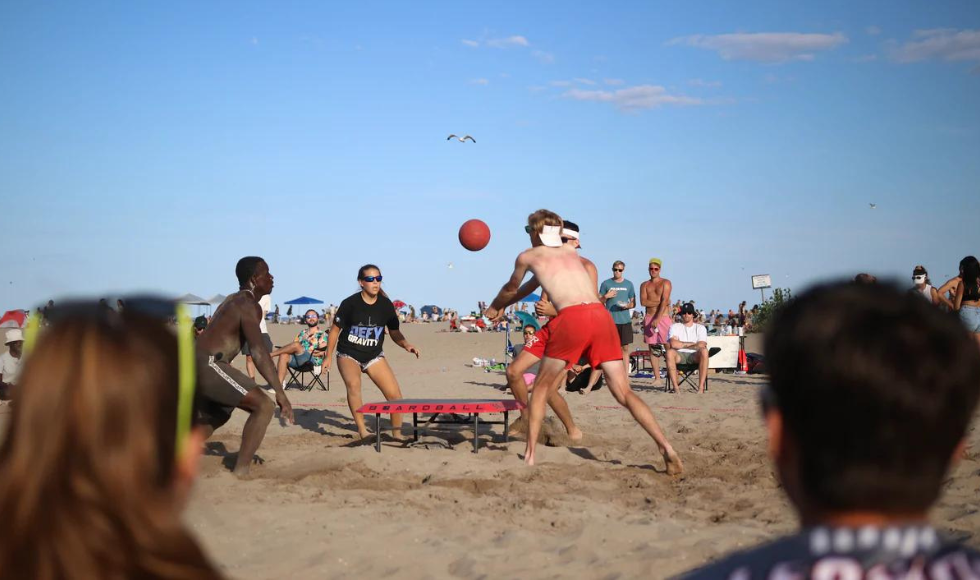 As we mark Global Entrepreneurship Week at McMaster, we are highlighting the innovative thinkers working to turn ideas into reality. Stay tuned to Daily News all week long as we share stories of McMaster community members whose entrepreneurial skills are making real-world impact.

Volleyball fan Amanda Nguyen wanted to be able to play her favourite sport anywhere — even in her apartment building’s empty squash court.

But without a net or a full team, the DeGroote commerce grad had to get a little creative during the pandemic.

The game she came up with, Boardball, became an overnight sensation and served up a business opportunity that Nguyen couldn’t pass on. She and friend David Borish turned the invention into a sports startup. Today, Boardball has won the top prize in the LiONS LAIR pitch competition, and is played in every province and territory in Canada, and every state in the U.S. Boards can also be found abroad, including in Japan and Egypt.

Boardball is played with two teams of two players each. Instead of hitting a ball over a traditional net, as in volleyball, players hit the ball onto a compact and portable board. It’s a fast-paced and exciting game, with players able to move 360 degrees around the board to make a play.

“The best way to think about it is volleyball meets Spikeball,” says Nguyen.

Nguyen realized Boardball could be more than a hobby when a video of her and her friends playing it went viral.

With more than 10 million views on the video, the Boardball team immediately put in an order for 1,000 boards.

“We thought we were going to tell others about our cool sport and show them how to play,” says Nguyen. “We didn’t think others would ask us about where they can buy the equipment to play themselves.”

The duo quickly got to work, experimenting with variations of the board and perfecting the rules of the game.

Nguyen says a big bonus of the game — that fact that the board is portable and it can be played anywhere — was partially due to the COVID-19 pandemic. With her building’s squash court no longer available to play in, she and her friends moved their games outside.

Set up to win

When it came time to launch the business, Nguyen says she drew on what she learned during her time as a Degroote School of Business student and as the president of the McMaster Entrepreneurship Association.

The McMaster graduate also points to the support the group received from The Forge, a McMaster-funded business incubator.

“I still remember during my first year being involved with The Forge, being invited to LiONS LAIR and getting to watch the competitions,” recalls Nguyen.

The Forge also helped Nguyen craft a pitch for Boardball for this year’s LiONS LAIR.

“Going into the competition, there were a lot of tech products and I didn’t think our product would qualify for what they’d be looking for out of their criteria for scalable businesses,” says Nguyen.

But Boardball ended up winning the annual competition, taking home the grand prize of $25,000.

Nguyen says McMaster continues to be a source of support — with Athletics & Recreation integrating Boardball into next year’s intramurals program.

Community members will get to try their hand at the new sport with Boardball being available in the Davis Braley Athletics Centre squash courts during the upcoming men’s volleyball championships.