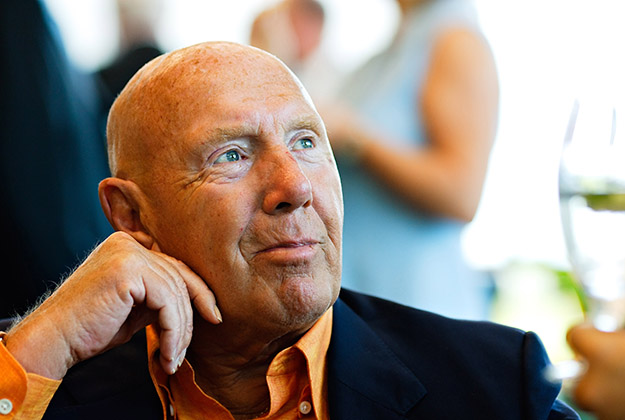 The $50 million gift from Michael DeGroote will support increased focus on national and international health leadership, including developing stronger ties and alignment with McMaster’s DeGroote School of Business as well as partnerships that focus on biomedical advances.

It was no ordinary oath ceremony for students graduating from McMaster’s Michael G. DeGroote School of Medicine today. They were surprised when the benefactor of the School took to the stage to announce a magnificent new $50 million gift.

The 200 students, their parents and friends leapt to their feet and grabbed their phones to take pictures and tweet the good news as DeGroote shared why he was renewing his commitment to the University, the School’s success and the future of health care.

“Not only have the people here achieved great things, but other donors have told me that my gift has helped inspire them to give, and that is very important to me. As you move forward in your exciting new careers as doctors, please know that I am proud and humbled to have played a small part in your education at McMaster. It is a real privilege to share this moment with you.”

“Mr. DeGroote is a remarkable and generous man,” said John Kelton, dean of the Michael G. DeGroote School of Medicine and vice-president of the Faculty of Health Sciences at McMaster. “His commitment to helping create doctors who provide the most innovative, compassionate and evidence-based treatment is unparalleled. His investments have seen our medical school become one of the top 15 in the world and the $50 million announced today will allow McMaster to climb to even greater heights.”

The gift will support increased focus on national and international health leadership, including developing stronger ties and alignment with McMaster’s DeGroote School of Business as well as partnerships that focus on biomedical advances.

Reaction to the Gift:

“As Mayor of the City of Hamilton I want to give my personal thanks on behalf of all of our residents to Michael DeGroote for this transformational gift. Hamilton can now be seen as a world leader in many areas of medical research which is a legacy of this gift that will be limitless in its benefits to our city and our country. Thank you Michael DeGroote.”

“Congratulations to McMaster University on today’s announcement of a $50 million donation from Michael DeGroote. McMaster University and it’s School of Medicine is world renowned for its innovative programs and research. This generous investment will benefit not just the City of Hamilton but the City of Burlington as well by attracting students, highly skilled professionals and health care companies to the area. Investing in our academic institutions is investing in improving our quality of life.”

The most exciting component is the creation of a new fund to seed the very best medical research within the Faculty of Health Sciences. The fund will reflect DeGroote’s passion for innovative and creative risk taking to support the most promising discoveries, move them from the lab to commercialization and ultimately create new jobs and businesses in Hamilton.

“Michael’s vision and the belief he has once again shown in McMaster is unparalleled,” said McMaster University president Patrick Deane. “Our goal is to see the medical school rise even further in its international prestige and such a landmark gift is the key to making that goal a reality.”

The McMaster oath ceremony sees each graduating doctor receive a copy of the Hippocratic oath. The entire graduating class recites the oath together in one of the most moving ceremonies of the convocation season.