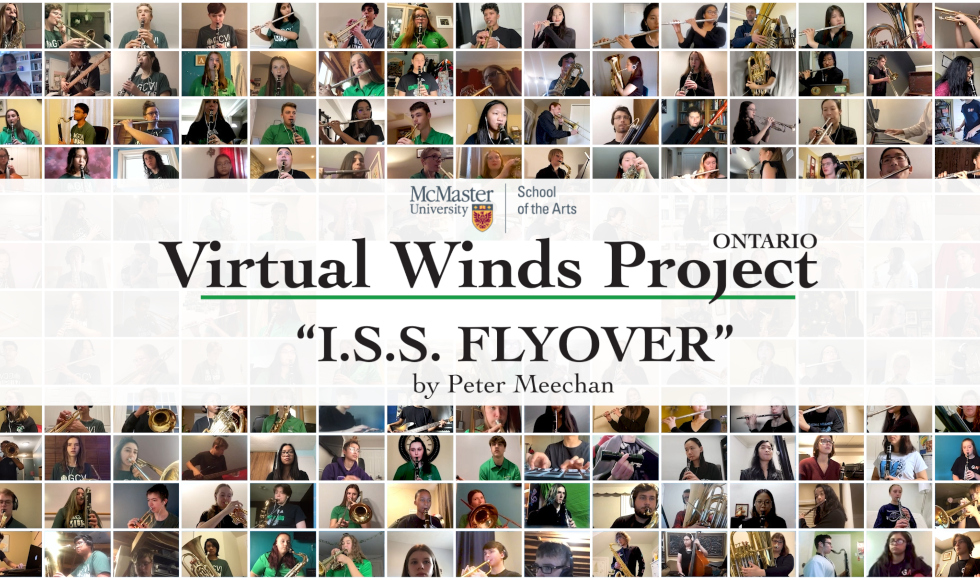 With in-person performances, lessons and rehearsals on hold, the COVID-19 pandemic has hit musicians hard. And since learning to play or sing with other people is a large part of many musicians’ education, restrictions on gatherings means many music students are missing out on an important aspect of their musical development.

That’s why Joseph Resendes, director of the McMaster Concert Band and a faculty member with the music department, decided to reach out to colleagues working in five area high schools with a question: Could they pull together an ensemble of McMaster and high school students to create a virtual performance?

“Musicians are pretty creative individuals – we try to make the best of every situation,” says Resendes. “We’ve always invited high school ensembles to our concerts, and always tried to provide them with opportunities to listen and learn from other musicians.”

But creating a performance video isn’t as easy as simply having all the participants play together on Zoom. Inconsistencies in internet connections and time lags mean that it’s impossible for musicians to stay in time with each other on online conferencing platforms, so each part has to be recorded separately and then mixed together.

It’s something that’s been done before – the Toronto Symphony posted an arrangement of Aaron Copland’s “Appalachian Spring” on YouTube in the early days of the pandemic, for example – but it isn’t easy.

The students recorded their individual parts, then teachers from each school collected each student’s video and uploaded those to a Google folder.

Resendes stripped the audio track out of each recording, edited, mixed and mastered all of them into a single audio file, then added the new audio track back into the video, syncing it up with the students’ movements.

“It’s definitely a labour of love,” laughs Resendes, who had to buy an additional hard drive for his computer to store all the files. “But what we’re trying to do with this project is to keep the kettle boiling for our students – keep them engaged in music until we can be onstage and performing again.”

The result was released on YouTube on March 1 at 7:30 p.m. At a pre-watch party for the participants before the public release, Meechan shared his thoughts on the project.

“The beauty of this project is that what we’ve lost is the shared experience, which of course we want in person – and while this isn’t the same, it’s still communal music making,” he said. “It speaks to the power of music to bring people together and lift them up, and what creative people can do when they get together and express themselves.”

Monika Kohlmaier, a fourth-year music student who’s also VP of the McMaster Concert Band, hadn’t been sure how it would all work out – but the final result was worth it, she said when the performers gathered on Zoom after the release.

“In the past year, we’ve had to give up a lot of things – and concert band could have been one of them,” she said. “Our wonderful conductor Joe looked at this as an opportunity to collaborate with not one, not two, but FIVE different schools. Once again, we were all able to experience that sense of community and musicality that draws all of us towards concert band.”

For Resendes, who knows his students would rather be playing in person, this is a good alternative – for now.

“I’m here to provide the students with a meaningful experience,” he says. “If this is one moment that’s memorable from a whole year of pandemic, then I’ve done my job.”