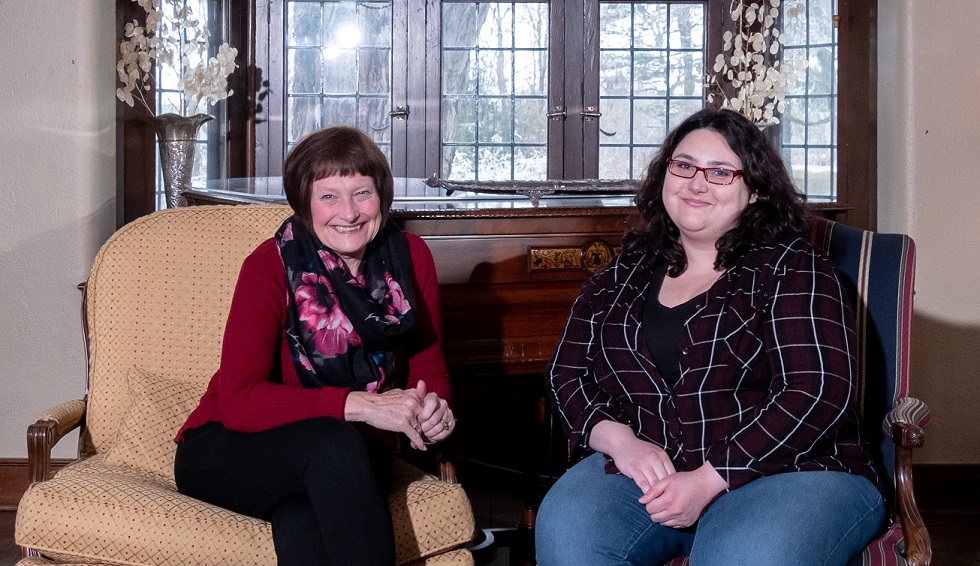 “They couldn’t have picked a better gift,” says Brenda Symons-Moulton ’76 (left) of the surprise birthday present from her family: a scholarship named in her honour. Third-year McMaster student Sarah List is the inaugural recipient. “This award has been hugely helpful,” says List. Photo by Sarah Janes.

It was summer 1975, her third summer at McMaster, and she had run out of money. Reluctantly, she told her mother she’d have to drop out.

Then, a letter from Mac came in the mail. She had received a scholarship.

“I had no idea,” says Brenda Symons-Moulton. “That $500 made all the difference.” She went on to graduate with her BA/BSW in 1976 and served for the next four decades as a social worker, counsellor, mentor, instructor, guest lecturer, speaker and champion for children’s rights. In 2015, she was honoured with a YWCA Woman of Distinction Award for Lifetime Achievement.

Life has a way of coming full circle. On her 65th birthday, her husband, son and daughter surprised her with a special gift: They had pooled their resources and created a student award in her honour to celebrate her lifetime of dedication to Hamilton’s social work community.

“She started to cry,” says her son, Christopher Moulton, who had taken the lead to coordinate the gift with Alumni Advancement. “She’s an incredibly giving person, and this was our way to thank her for all she’s done and recognize all the lives she’s touched during her more than 40 years of practice.”

The Brenda Symons-Moulton Academic Grant supports a McMaster student in Level III or above in a social work program, who attains a high average and demonstrates financial need.

“We were so delighted to learn about this gift and thought it such a perfect way to honour Brenda,” says professor Christina Sinding, director of McMaster’s School of Social Work. “Our colleagues in the community speak so highly and with such warmth about Brenda — her skills as an educator, her wisdom as a mentor, her dedication to social work as a profession, as well as her good humour, good sense and generosity.”

Symons-Moulton knew she wanted to be a social worker by the time she was 12. “It was a field that chose me,” she says. In turn, she chose McMaster — as luck would have it, the university had just launched a new school of social work.

Forty-three years later, she’s still working in the field. “It’s that passion I want to pass on to future students,” she says.

Sarah List is the first recipient of the new academic grant. She also had no idea what was coming, when she opened the email in December. “I was absolutely floored,” she says. The award has paid her tuition this semester. “This has been hugely helpful,” says List, a single parent. “It helped to relieve stress and let me focus more on school and parenting.”

“They couldn’t have picked a better gift,” says Symons-Moulton of her family’s gesture. “It’s an amazing way to feel honoured.” Her husband, Ralph Moulton, and her daughter, Laura Hutchinson, are also Mac grads.

Her son, Christopher, spent much of his childhood on the Mac campus. A University of Guelph grad, he now works there as a fundraiser.

“Philanthropy is a beautiful thing,” he says. “It has a multiplier effect.”