Resident thanks her “champions” for success in radiation oncology 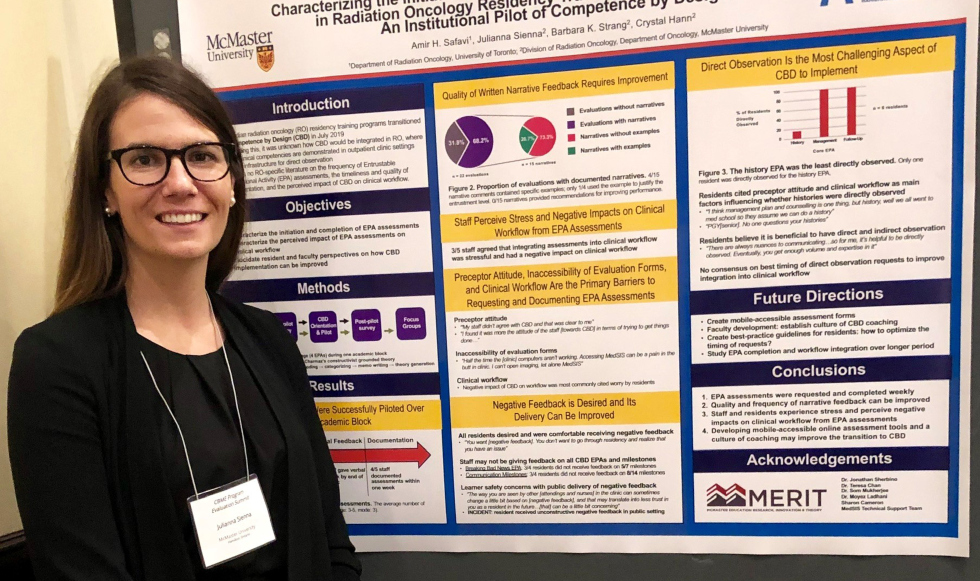 Julianna Sienna’s story is one filled with champions, from her peers at McMaster University to the members of her family.

This month, Sienna marks the completion of her residency in radiation oncology from the Postgraduate Medical Education (PGME) program at McMaster’s Michael G. DeGroote School of Medicine. She’s spent 15 years in post-secondary education working towards this moment, with people cheering her on every step of the way.

“I’ve had lots of champions who have allowed me to be successful, and many of those people are in PGME or associated with PGME,” she says.

Sienna grew up in Oakville and is the first medical doctor in her family.

As a high school student, she was undecided about her future, until a co-op sealed her fate.

“I initially had thought about becoming a lawyer, but my dad put a bug in my ear that I may enjoy being a doctor,” she said. “I did a co-op when I was in Grade 11 at SickKids Hospital in Toronto in the Neonatal Intensive Care Unit and that cemented it for me.

“Ever since then, most of the things I have done have been with the goal of medicine in mind. I have many other interests, but I kept coming back to medicine.”

Sienna earned a bachelor of science degree with a double major in medical science and biology from Western University, but when she applied to medical school things didn’t go as planned.

“I applied after fourth year, but didn’t get in and didn’t even get an interview,” she said. “So, I did my master’s degree which ended up being a phenomenal experience. In the beginning, it seemed like I was really diverging from my plan but it ended up being an important part of my story and how I got to where I am today.”

After completing a master of medical science degree with a specialization in biomedical toxicology at the University of Toronto, she applied to medical school a second time. She happily accepted an offer to Queen’s University for medical school, and then came to McMaster for her medical residency.

It was the people that ultimately led her to choose McMaster.

She says one of her biggest champions was Barb Strang, associate professor of oncology and program director of the radiation oncology residency program at McMaster.

“Dr. Strang is a significant reason behind the success I’ve had at McMaster,” she said. “I would say 95 per cent of what I achieved in the past five years was because of support and encouragement from her and the radiation oncology department. Dr. Strang gave me the platform to explore all my different interests. I would not be where I would be right now if not for her supporting me.”

She said she is also grateful to her many other mentors, especially her female peers.

As a way to give back, Sienna has spent the past four years mentoring medical students and aspiring radiation oncology residents at McMaster.

“I’ve had such great mentors and I feel like I’ve only been able to achieve what I have because of people that have made it possible for me,” she said. “Paying that back is important to me.”

Sienna will soon be starting a fellowship in pediatric radiation oncology in Toronto at SickKids and Princess Margaret Cancer Centre.

“People ask me why I would want to work in pediatric oncology, thinking it would be depressing,” she said. “For me, it’s the most difficult time in a patient’s life and to be able to be a part of that and help guide families through that is so fulfilling. With radiation oncology, you get the added benefit of technology and radiation planning, which appealed to different parts of my brain.

“I know that there aren’t very many people who are able to work as pediatric radiation oncologists in Canada, but I believe if people see how passionate you are, they will help you reach your goals. You have to go for what you want.”

Sienna is grateful to her dad, Lee, who is proud to be Hamilton born and raised, to her mom, Anne Marie, and her sisters, Kate and Natalie.

Sienna and her husband, John Canario, live in Burlington. Canario, a lawyer by trade, is a hockey operations associate and amateur scout with the National Hockey League.

“Despite having a very busy schedule himself, he always makes time for us which helps me recharge and be ready to tackle all of the projects I have taken on,” she said. “He is endlessly supportive and I wouldn’t have survived residency without him as my teammate.”

The end of June marks the completion of training for more than 300 residents and fellows in the Postgraduate Medical Education (PGME) program of McMaster University’s Michael G. DeGroote School of Medicine.