Leaders in antibiotic research, nursing, business, journalism and community service to be honoured at Convocation 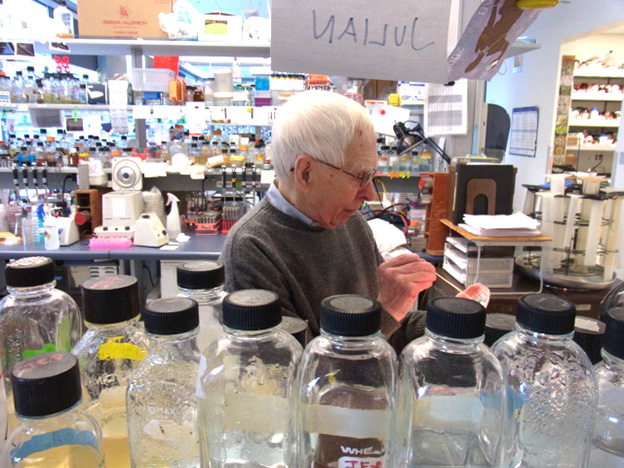 Julian Davies, a leading figure in the early understanding of antibiotic resistance, is to be the first recipient of an honorary doctorate when McMaster begins its Spring Convocation ceremonies Friday.

Students in the Faculty of Health Sciences (excluding Nursing), celebrated their graduation last month, starting a Convocation season that continues this week, when other faculties and programs host their Convocations in ceremonies from June 8 to 12.

Davies, who appeared at the Health Sciences ceremony, is a professor emeritus in the Department of Microbiology and Immunology and principal investigator of the Davies Lab at the University of British Columbia (UBC).  His earlier academic appointments include serving as a department chair at the Institut Pasteur in Paris.

Described by the journal Nature Biotechnology as “an icon of the European biotech industry”, he has made significant contributions to the understanding of antibiotics and bacterial resistance — topics that are now the focus of research at McMaster’s Insitute for Infectious Disease Research, where Davies is a member of the Scientific Advisory Board.

Richard Buckingham (DeGroote School of Business, 2:30 p.m June 8), who served as Chair of McMaster’s Board of Governors, is a native of Manitoba who spent his teens in Burlington. Buckingham graduated from McMaster University and Harvard Law School.  After practicing law in New York City, he turned to private investment banking, working in Canada, New York and now London. Buckingham has maintained a strong connection to McMaster, through signigifcant gifts and volunteer service. Currently an honorary governor, he served for many years on the board,  including service as vice-chair from 2009 to 2010 and chair from 2011 to 2013.

Judith Shamian (Nursing & Medical Radiation Sciences Program, 9:30 a.m. June 9), a researcher, educator and international leader in the field of nursing, has been described as one of Canada’s most powerful women. A professor at the University of Toronto’s School of Nursing and president of the International Council of Nurses, she was president and CEO of VON Canada for eight years after serving in a series of key leadership positions including as executive director of nursing policy for Health Canada, president of the Canadian Nurses Association and vice-president of nursing for Mount Sinai Hospital in Toronto where she established a World Health Collaborating Centre for Leadership Development – the first collaboration of its kind.

Joseph (Joey) and Toby Tanenbaum (Faculty of Humanities and Arts & Science Program 2:30 p.m. June 9) have established one of Canada’s most important philanthropic legacies through gifts primarily to the arts, cultural institutions and health care.  Joseph is founder and chair of Jay-M Enterprises and Jay-M Holdings Ltd., past chairman of Hydro-Pontiac Inc. and Pembroke Electrical Light Co., and the former president and CEO of the Bridge and Tank Company in Hamilton. The Tanenbaums are best known for building public art collections with gifts to institutions including the National Gallery, Art Gallery of Ontario, the Royal Ontario Museum and the Art Gallery of Hamilton, where their gift established arguably the most important collection of nineteenth-century French art in Canada.

Catherine Frazee (Faculty of Social Sciences, 9:30 a.m. June 10) is a retired professor and former co-director of the RBC-Ryerson Institute of Disability Studies, Research & Education at Ryerson University. Through her scholarship, activism, teaching, art and public service, she has challenged barriers to the full social inclusion of people with disabilities and created identifiable change in everything from artistic opportunities to legislation. The chief commissioner for the Ontario Human Rights Commission from 1989 to 1992, Frazee worked for decades to advocate for human rights through her involvement with organizations including the Disabled Women’s Network (DAWN), the Canadian Abilities Foundation and the Abilities Arts Festival.

Ela Bhatt (Faculty of Social Sciences, 2:30 p.m. June 10) is an iconic leader of the international labour, women’s and micro-finance movements. A member of India’s Parliament from 1986 to 1989, Bhatt is a charter member of The Elders, a group of 12 respected world leaders formed by Nelson Mandela. She joined the legal department of the Textile Labour Association (TLA) in Ahmedabad, India in 1955 and was soon influenced by the challenges faced by self-employed female textile workers. She founded the Self-Employed Women’s Association (SEWA), a trade union that now has more than 1 million members. She co-founded and chaired Sa-Dhan (the Association of Community Development Finance Institutions), Women’s World Banking and the Indian School of Micro-finance for Women.

Peter Calamai (Faculty of Science, 9:30 a.m. June 11) started his journalism career at McMaster’s Silhouette and continued professionally at The Hamilton Spectator. His 40-year career included terms at Southam News and Canadian newspapers as a reporter, editor and photographer with postings in Ottawa, Vancouver, London, Nairobi and Washington.  He was editorial page editor of The Ottawa Citizen and national science reporter for The Toronto Star. Calamai has served as a volunteer with national organizations including the Science Media Centre of Canada, Environment Canada, the Natural Sciences and Engineering Research Council, the Canadian Language and Literacy Research Network, Youth Science Canada and the Canadian Science Writers’ Association

George Roter (Engineering, 9:30 a.m., June 12) co-founded Engineers Without Borders (EWB) Canada with Parker Mitchell, becoming the organization’s chief executive officer.  Time magazine recognized Roter as one of Canada’s next generation of social leaders in 2001. He and Mitchell built EWB Canada into an influential international organization with more than 3,000 volunteers, 50,000 supporters, 35 chapters in Canada and teams working in African nations including Malawi, Burkina Faso, Ghana and Zambia. The innovative solutions that Engineers Without Borders has helped deliver – particularly in agriculture and rural infrastructure – have influenced the lives of more than 2.5 million people.  In Canada and specifically at McMaster, EWB Canada has also had a signficant impact as it provide a vehicle and a call to action for socially minded engineers.

Thomas Jenkins (Engineering, 2:30 p.m. June 12) is chairman of OpenText Corporation having served in numerous executive roles as OpenText became Canada’s largest software company.  The McMaster alumnus – and new chancellor of the University of Waterloo – has a strong record of public service including serving on and chairing numerous panels, boards and committees. Jenkins is a director of the C.D. Howe Institute and the Canadian Council of Chief Executives as well as a founder of Communitech, the Waterloo Region Technology Association.  He served as a commissioned officer in the Canadian Forces Reserve and is an honorary colonel of the Royal Highland Fusiliers.