Celebrating longtime employees: Where were you 45 years ago? 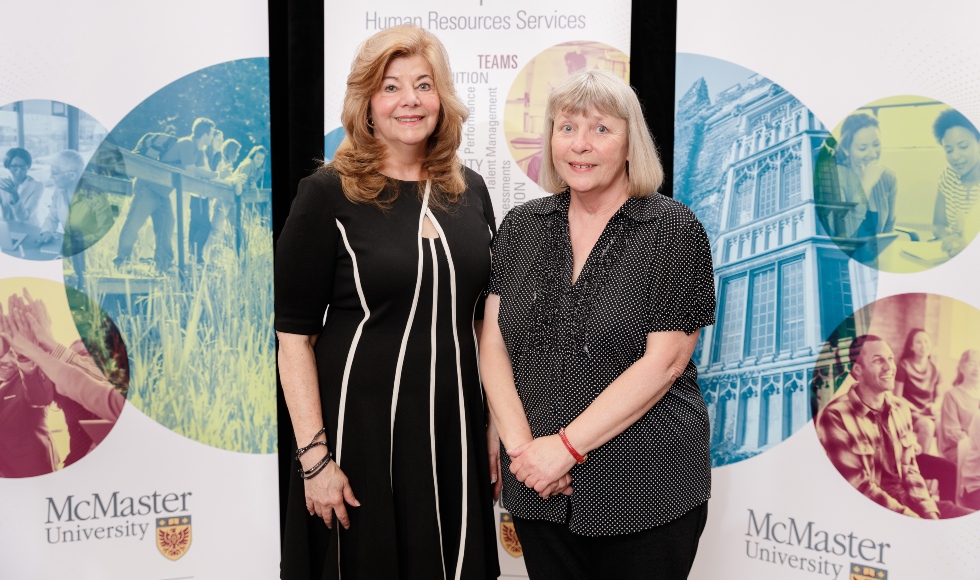 In 1974, Ontario minimum wage rose from $2.00 to $2.20, Winnipeg’s Terry Jacks topped the charts with “Seasons in the Sun,” and the federal Liberals were re-elected to a majority, giving Pierre Trudeau a third term as Prime Minister.

That’s also the year Carol Lavery and Chris Westoby began their careers at McMaster. The university community celebrated their 45-year “McMasterversary” at the Service Awards Celebration on Friday.

In all, the university thanked 387 employees marking anniversaries of 10, 15, 20, 30, 35, 40 and 45 years at the event. Employees celebrating 25 years with McMaster are recognized at a separate ceremony in February each year. What roles have you held at McMaster?

What do you remember about your first day?

Well, it was my birthday, and I had just finished exams, graduating from McMaster University with a Bachelor of Science Degree. On my first day, I was introduced to then master’s student Ken Rosenthal who taught me how to do tissue culture. I had no idea then that this young man would later become a leading HIV researcher at McMaster and a Principal Investigator within our own group.

What is it about McMaster that has led you to have such a long career here?

I was fortunate enough to work with a very dynamic group of researchers. I was able to work in multiple disciplines throughout my career – mucosal immunology, virology, and epidemiology projects – always learning. I’ve basically been going to school for over 45 years! McMaster is a world-renowned research institute and it’s been an honour to work alongside globally respected research scientists, staff, and students.

What is your favourite memory of working at McMaster in past 45 years?

Every year we have a potluck holiday party for the staff and students. It is a time for fun and fellowship. Through the years I’ve been treated to culinary specialties from around the world because of the diverse and eclectic group of people who have come through the McMaster Immunology Research Center.

What project have you worked on that you are most proud of?

In 2004, I received the President’s Award for Outstanding Service. While maintaining my role and responsibilities as Lab Manager, I consulted with the architects and contractors on the design of the wet lab space for the new MDCL; ensuring a smooth transition of our research labs from the Health Sciences Centre as well as the purchase and installation of newly awarded CFI equipment.

It’s been a privilege to see so many of our McMaster graduates go on from the work they have done here and further develop their own research. I’m proud of my role in helping them as they worked towards their own scientific goals. It’s also been an honour to work with so many brilliant scientists, and I attribute my successes to the unwavering support of all the directors and principal investigators, and I give a special thanks to the research assistants and support staff of the MIRC. What roles have you held at McMaster?

What do you remember about your first day?

I was only 20 years old and I was probably a little worried about that first day. I do remember earning $426 per month, which was a little better salary than at my previous banking job.

What is it about McMaster that has led you to have such a long career here?

McMaster was an important part of our world growing up. My Dad, Douglas Allaby, was the Director of Alumni Affairs from about 1951 to his retirement in 1984. He thoroughly loved his work and often brought us to campus. It seemed inevitable that my brother and I would end up working here too. (Ted Allaby was a bookstore employee for 44 years, retiring in 2012.) My job involves assisting department staff and professors with their research grant accounting. I have worked with so many wonderful people over the years and they are very grateful to have some help in this area. After 45 years, I am retiring on June 30.

What is your favourite memory of working at McMaster in past 45 years?

McMaster has played such a large part in my life – I got married here, had 2 children at the hospital on campus. In terms of a work-related memory, it’s probably that I had a great boss, Alan Frosst, in the first years of working for Research Services. He was wonderful and allowed me to work part-time, three days a week while my children were growing up.

What project have you worked on that you are most proud of?

I have handled the accounting for many projects. The large Ontario Research Fund projects with an audit requirement are the most satisfying.

Thousands of faculty and staff attend thank you BBQ on campus